Vancouver, B.C., November 10, 2020 – Ximen Mining Corp. (TSX.v: XIM) (FRA: 1XMA) (OTCQB: XXMMF) (the “Company” or “Ximen”) is pleased to provide the following update on progress at the Kenville Gold Mine project in the Nelson mining camp in southern British Columbia.

Work on the 257 portal has gone well and is in the final stages. The culvert has been constructed and placed on graded bedding. Cement block retaining walls were constructed and placement of back-fill is nearly complete. Also, rail ties and track are being laid in the new portal culvert section to connect with the mine (see photos below). 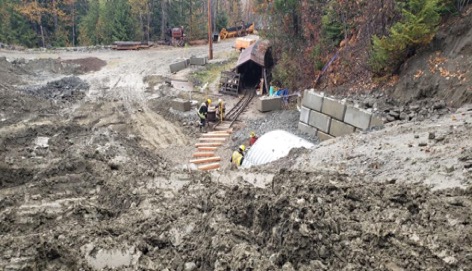 Photo of crew laying track outside of new culvert entrance at Kenville 257 Portal.

Photo of culvert being constructed at Kenville 257 Portal.

Once placement of back-fill is completed, an as-built survey will be done for the consultant engineer to sign off.

Other site activity included the arrival of new mining equipment in anticipation of work starting on the new portal (see photos below).

Photo of truck arriving at Kenville Mine with equipment for underground mining (drill in front, rock truck in back).

Photo of new underground loader (3-yard capacity) delivered to Kenville mine in October.

Permitting is advancing with public notifications completed and other minor additions to the application complete. An updated application will be submitted to the Ministry of Mines in days.

Dr. Mathew Ball, P.Geo., VP Exploration for Ximen Mining Corp. and a Qualified Person as defined by NI 43-101, approved the technical information contained in this News Release.
The Company is also pleased to announce that it has closed a financing for gross proceeds of $408,000. The non-brokered private placement consisted of 1,600,000 million units at a price of $0.255 per unit. Each Unit consists of one common share and one transferable common share purchase warrant. Each whole warrant will entitle the holder to purchase, for a period of 24 months from the date of issue, one additional common share of the Issuer at an exercise price of $0.35 per share. The hold expiry date for the placement is March 7, 2021. The net proceeds from the private placement will be used for further exploration on the Company’s British Columbia mineral properties and general working capital.
Christopher Anderson a director and/or officer of the Company, participated in the Offering constituting a related party transaction pursuant to TSX Venture Exchange Policy 5.9 and Multilateral Instrument 61-101 – Protection of Minority Security Holders in Special Transactions (“MI 61-101”). The Company relied on section 5.5(a) of MI 61-101 for an exemption from the formal valuation requirement and section 5.7(1)(a) of MI 61-101 for an exemption from the minority shareholder approval requirement of MI 61-101 as the fair market value of the transaction did not exceed 25% of the Company’s market capitalization.