“Now that we have completed this part of our acquisition plan, we will move forward at Kenville as planned to start mining. As early as next week we’ll have boots on the ground, and the crew will begin refurbishing the Kenville mine portal before building the portal for the new decline. As soon as this part is finished, we can start cracking rock. The most exciting time for Ximen Mining starts right now!” Stated Anderson, CEO of Ximen Mining Corp

Beginning in January of this year, Ximen has been very active with acquisition of several claim groups in the Nelson mining camp that are located near Ximen’s Kenville mine. A total of 13,667 hectares have been acquired from seven separate groups. Ximen’s total holding in the Nelson area now stands at approximately 14,234 hectares.

In the Greenwood mining camp, Ximen recently acquired 6 mineral claims covering a total of 380.6 hectares from Saville Resources Inc. Earlier, Ximen had acquired one mineral tenure from a private party. Ximen’s holdings in the Greenwood area now total approximately 17,152 hectares. This excludes the Gold Drop property (2,269 hectares) which was acquired from Ximen by GGX Gold Corp in 2019 (Ximen retains an NSR royalty and a back in right on the Gold Drop). 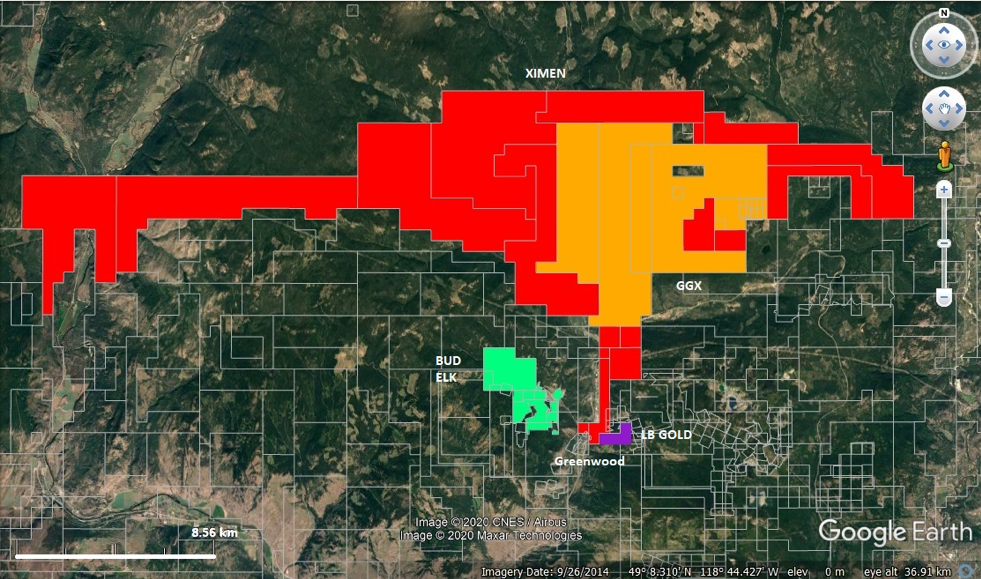 Ximen will continue to pursue property acquisitions to further consolidate its holdings in these historic mining camps.

At the Kenville Gold Mine, the Company will start work imminently on refurbishing the existing portal to the Kenville mine which will be utilized as an egress and ventilation for the new Portal. Once that is complete, work can proceed on starting the new decline following ministry final approval of the development program.

At the Brett epithermal gold project near Vernon, BC, work planned includes a 200 metre extension of the underground drift along the Main Zone and underground diamond drilling of the Main and parallel zones. Ximen is waiting for the Ministry of Mines to complete its review and approval of this program. As well, field exploration work is planned including surface rock sampling and geophysics.

At Greenwood, an exploration permit is in place for field work to begin on the Providence property once the snow pack has melted. The planned work includes rock sampling, trenching and drilling.

In light of the current market conditions Ximen is actively pursuing opportunities and synergies to increase its precious metals land holdings in southern BC with the objective of being able to build resources in the region. With shareholder support, the input from Ximen’s Financial advisors at Laurentian Bank and the continued support from the $8,000,000 credit facility that allows Ximen to access capital when required via private placements, has put the company in the fortunate position to take advantage of opportunities resulting from the current market environment.

Further the company is pleased to announce that it has closed the first tranche of its non-brokered private placement previously announced on March 5, 2020. The placement consisted of 1,200,000 flow through shares at a price of $0.50 per share for gross proceeds of $600,000. Each Flow-Through share consists of one common share that qualifies as a “flow-through share” as defined in subsection 66(15) of the Income Tax Act.

The net proceeds from the Offering will be used by the Company for exploration expenses on the Company’s British Columbia mineral properties. The Company paid a cash commission of $42,000 and issued 84,000 finders warrants to Qwest Investment Fund Management Ltd. The finder warrants are valid for 2 years from closing with an exercise price of $0.50. All securities issued in connection with the flow through Offering will be subject to a hold period expiring July 10, 2020.

The Company is also pleased to announce that it has closed a tranche of its drawdown equity financing facility with Alumina Partners (Ontario) Ltd., an affiliate of New York-based private equity firm Alumina Partners LLC. In this tranche closed on March 9, 2020, the Company drew down $150,000 from Alumina with Alumina receiving 454,545 units of Ximen consisting of a common share priced at $0.33 per share and a 36-month warrant exercisable at $0.55 per share. The hold expiry date for the placement is July 7, 2020. The net proceeds from the private placement will be used for the further exploration on the Company’s British Columbia mineral properties and general working capital.

May 11, 2021
PrevPreviousEarly Warning Press Release Regarding Investment in Falcon Gold
NextBuy, Sell, Lease or Trade Your Car — Even From HomeNext