VANCOUVER, British Columbia, Oct. 07, 2021 (GLOBE NEWSWIRE) — Silver Hammer Mining Corp. (CSE: HAMR / OTC: HAMRF) (“Silver Hammer” or the “Company”) is pleased to report that it has staked an additional 52 new claims at its Eliza Silver Project in the historic Hamilton District of Nevada, more than doubling its land package.

The Eliza Silver Project is located along the south side of the Eberhardt fault, opposite the past-producing Treasure Hill Mine in the Hamilton Mining District, Nevada’s highest-grade silver district producing 40 million (M) ounces (oz) silver with historic mined ore grades of up to 18,700 grams per tonne (g/t) between 1860-1872. Surface samples as high as 25,000 g/t were collected in the 1960s.1 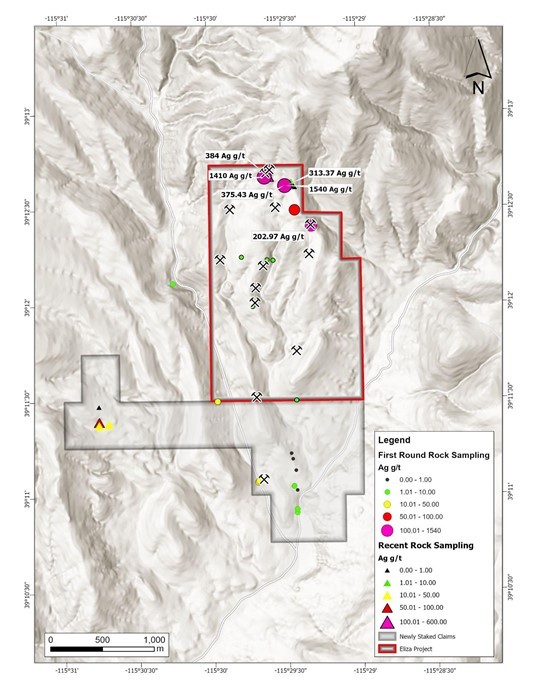 “Our initial exploration work has identified mineralization that extends onto these newly acquired claims along the lower half of the Eliza project,” stated President Morgan Lekstrom. “We are currently conducting a mapping and geochemistry program on the property where we see significant potential for discovery in areas that have never been explored using modern exploration techniques. We will use this data to plan an extensive initial exploration program targeted for early 2022.”

Additionally, initial results from a sampling program at the Company’s Silverton Mine, a project sharing similar geology and Aster signature to Kinross Gold’s Round Mountain project located approximately 108 kilometres to the west, have confirmed surface gold mineralization on the east side of the property. A sample of 6.1 g/t gold was taken from the silicified tuff (see Figure 2). The Company also announces that David Grandy has stepped down as a director of the Company in order to pursue other opportunities. The Company thanks Mr. Grandy for his services, including helping take the company public, and wishes him the best in his future endeavours.

Technical aspects of this press release have been reviewed and approved under the supervision of Philip Mulholland, P.Geo. Mr. Mulholland is a Qualified Person (QP) under National Instrument 43-101 Standards of Disclosure for Mineral Projects.

Silver Hammer Mining Corp. is a junior resource company advancing the past-producing Silver Strand Mine in the Coeur d’Alene Mining District in Idaho, USA, both the Eliza Silver Project and the Silverton Silver Mine in one of the world’s most prolific mining jurisdictions in Nevada and the Lacy Gold Project in British Columbia, Canada. The Company has commenced an initial drill program at Silver Strand that will test for silver and gold mineralization immediately below the mine’s lowest level extending only 90 metres below surface. Lakewood strives to become a multimine silver producer and will focus near-term exploration and drilling plans at the Company’s Idaho and Nevada silver-gold assets.

On Behalf of the Board of Silver Hammer Mining Corp.

The CSE does not accept responsibility for the adequacy or accuracy of this release.

The Canadian Securities Exchange has neither approved nor disapproved the contents of this press release.