VANCOUVER, British Columbia, Oct. 07, 2021 (GLOBE NEWSWIRE) — Pegasus Resources Inc. (TSX-V: PEGA; Frankfurt – 0QS, OTC/Pink Sheet symbol SLTFF) (the “Company” or “Pegasus”) is pleased to announce the acquisition of the Pine Channel Uranium Property (the “Property”) in the prolific Athabasca Basin of northern Saskatchewan. The property encompasses 6,028 ha in six mineral claims situated at the northern most edge of the Athabasca Basin, about 40 km due west of the community of Stony Rapids, Saskatchewan. It is accessible via trails and winter road which lead from Stony Rapids, cross the property, and continue westerly to other locations. 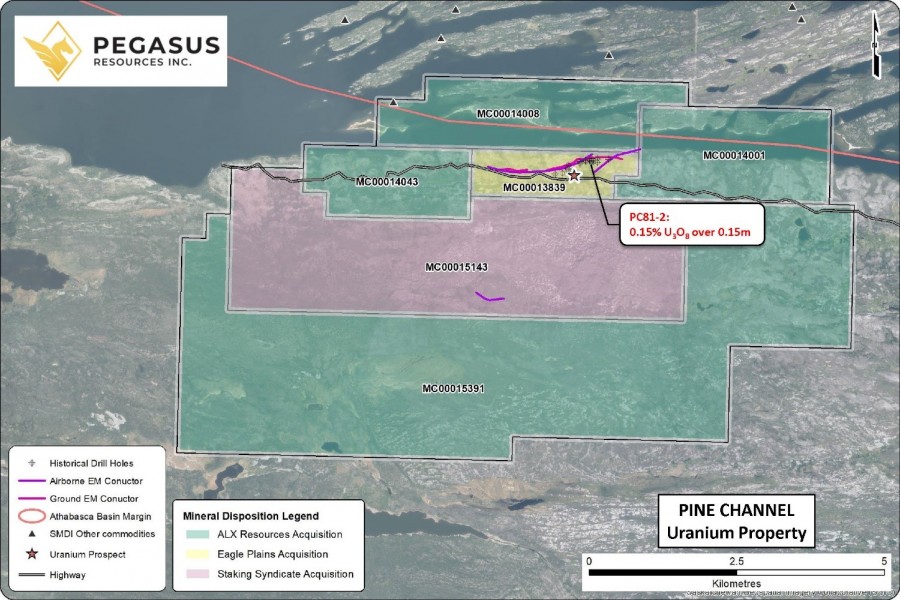 The property with a thin cover of Athabasca Basin, is underlain at shallow depths by the structurally complex Tanto Domain, which is host to numerous U, Cu, Ni and Au occurrences.

During the 1970’s Denison Mines Ltd. conducted both airborne and ground geophysical surveys at and around the Pine Channel property. During 1979, Denison drilled a total of 12 diamond drill holes in the area to test a conductor that was coincident with a magnetic contact.

Results were very encouraging and included:

In 1981 Denison completed an additional four holes on the Pine Channel Property to test ground geophysical conductors at the same location as the 1979 drill holes. At least four drill holes intersected elevated radioactivity directly above the unconformity, including PC81-2 which intersected 0.15% U3O8 over 0.15m.

The property remained idle until about 2005 when UEX Corporation completed an airborne magnetic, radiometric and gravity survey, as well as an airborne MegaTEM survey atop the Pine Channel Property and surrounding area. 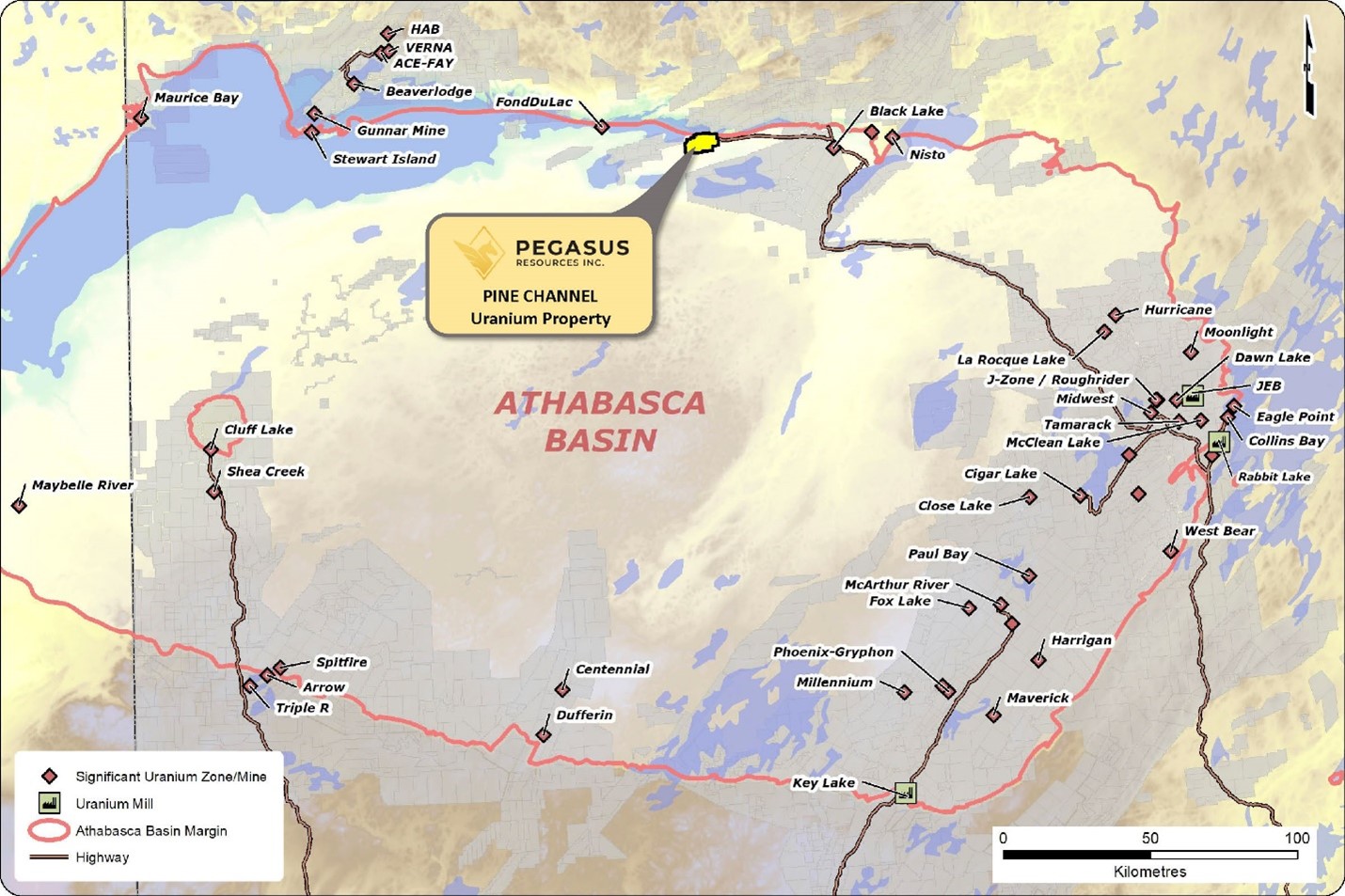 With the discovery of NexGen’s Arrow deposit, recent exploration in and around the Athabasca Basin has included the search for other high-grade, basement hosted uranium occurrences. The Pine Channel property has several important attributes which make it an attractive exploration target for this deposit type:

The location and road accessibility provide for an opportunity to conduct advanced exploration year-round at Pine Channel.

According to Charles Desjardins, CEO, “Despite significant success at the Pine Channel Property, including highly anomalous radioactivity being identified in structurally complex basement rocks, exploration essentially halted in 1981. We are very excited to have acquire this project, which has not only sat idle since the early 80’s, but also which was explored at a time prior to the discovery of uranium in basement rocks such as at NexGen’s Arrow and Fission’s PLS Projects.”

The company intends to begin an immediate program of data compilation, review and planning for the next stages of exploration at the Pine Channel Property.

A 100% interest in the Pine Channel Property (Claim MC00013839) was acquired from Eagle Plains Resources Ltd. by issuing 500,000 shares of Pegasus (subject to a 2% NSR). The 2% NSR is subject to a buyback provision whereby the company can reduce the NSR to 1%, for a cash payment of $1 million.

The Company has signed a binding letter of intent with a Staking Syndicate. Details to follow.

These acquisitions are subject to acceptance by the TSX Venture Exchange and the respective Boards of Directors of ALX Resources Corp. and Eagle Plains Resources Ltd.

The scientific and technical information contained in this news release has been reviewed and approved by Neil McCallum B.Sc., P.Geol. of Dahrouge Geological Consulting, and is a “Qualified Person” as defined in NI 43-101.

Pegasus Resources Inc. is a diversified Junior Canadian Mineral Exploration Company with a focus on zinc and base metal properties in North America. The Company is also actively pursuing the right opportunity in other resources to enhance shareholder value. For additional information please visit the Company at www.pegasusresourcesinc.com or contact Charles Desjardins at This email address is being protected from spambots. You need JavaScript enabled to view it..

Charles Desjardins
President and Director
Pegasus Resources Inc.
700 – 838 West Hastings Street
Vancouver, BC V6C 0A6
PH: 1-604-369-8973
E: This email address is being protected from spambots. You need JavaScript enabled to view it.