TORONTO, Oct. 7, 2021 /CNW/ – Minsud Resources Corp. (TSXV: MSR) (“Minsud” or the “Company”), is pleased to announce receipt of assay results from the additional seven (7) drill holes completed in the ongoing Phase 3 program over the Chinchillones area, located at the Chita Valley Project, San Juan province, Argentina. Encouraged by the results received, the Company and its partner, a subsidiary of South32 Limited (“South32“), have decided to extend this drilling program, with the aim of continuing exploring this recently discovered area, expecting to complete a total of 12,000 metres by the end of the year.

Nineteen (19) drill holes were completed to date this year encompassing a total of 8,600 metres, including three (3) new drill holes in other areas of the Chita Valley Project. Highlights are listed below, along with accompanying figures.

Ramiro Massa, Minsud’s President & CEO, said: “The potential for a large-scale copper-moly porphyry system in the Chinchillones area remains open to the south and at depth. These results have created a great deal of excitement and expectation within the team, and we are currently reviewing the next steps with our partner South32. We believe that we have a unique opportunity at the Chita Valley Project.” 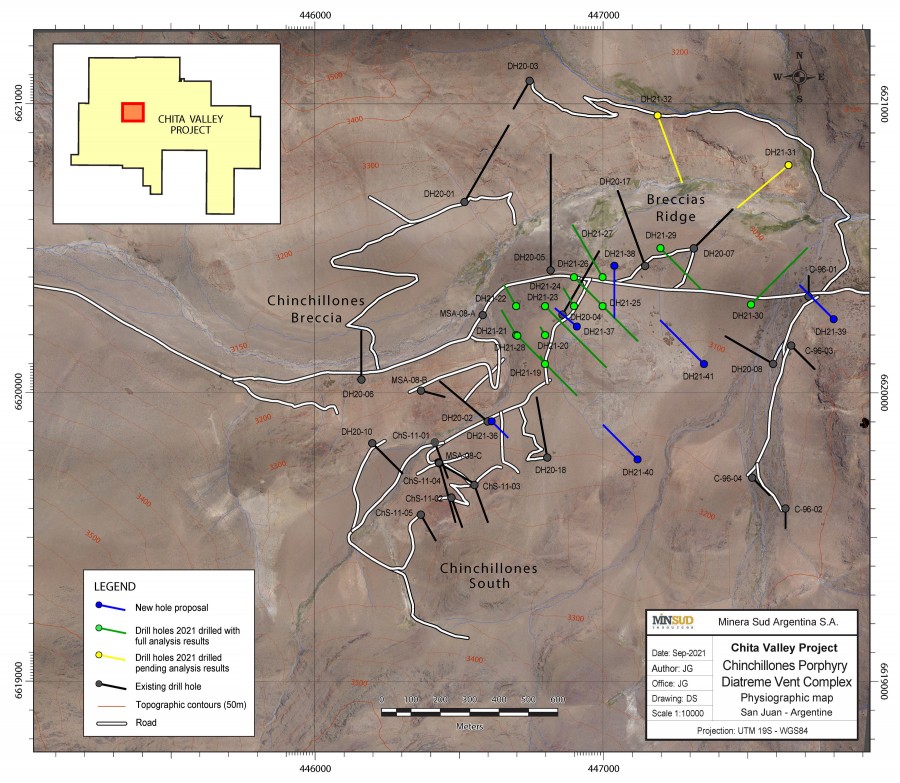 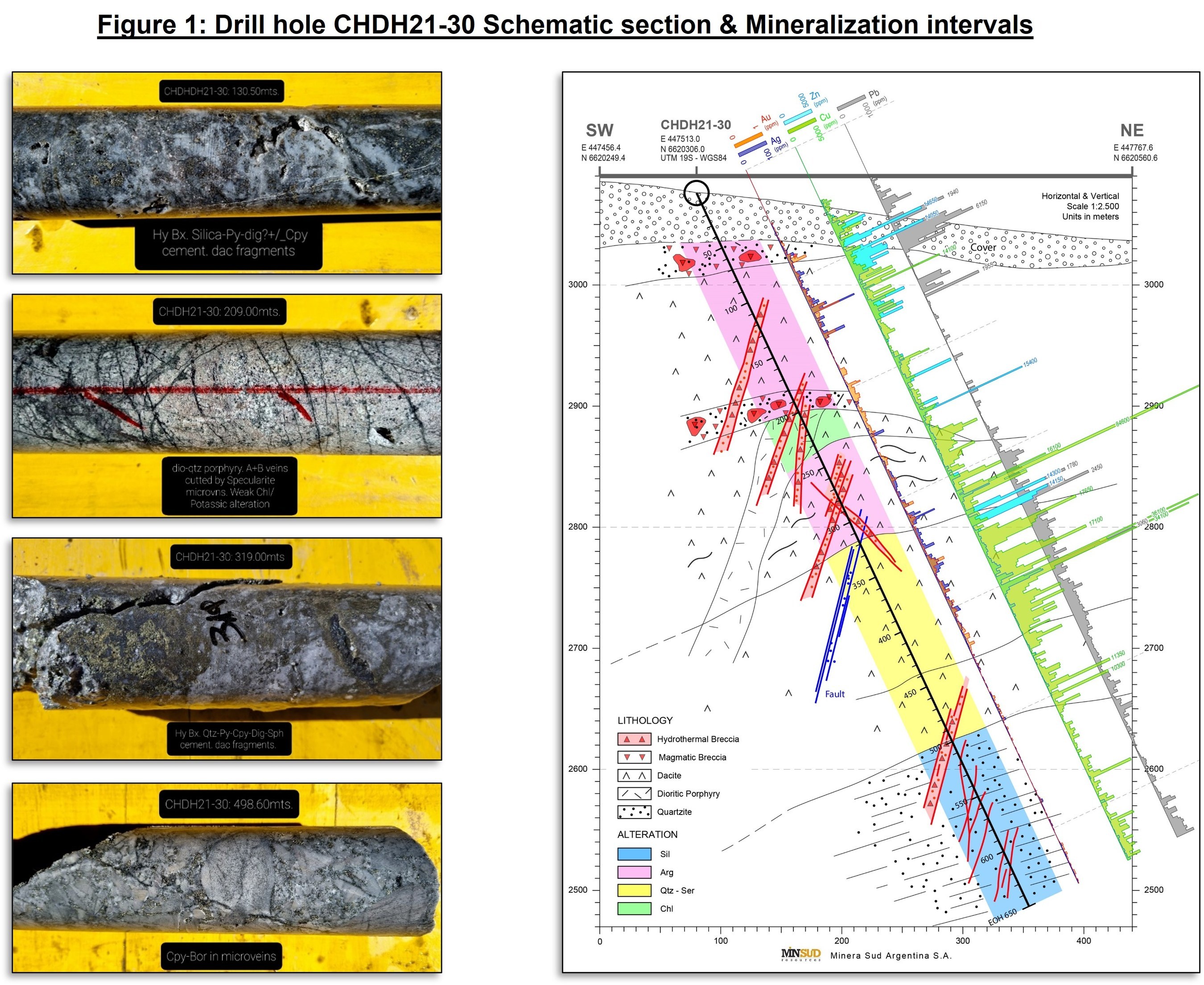 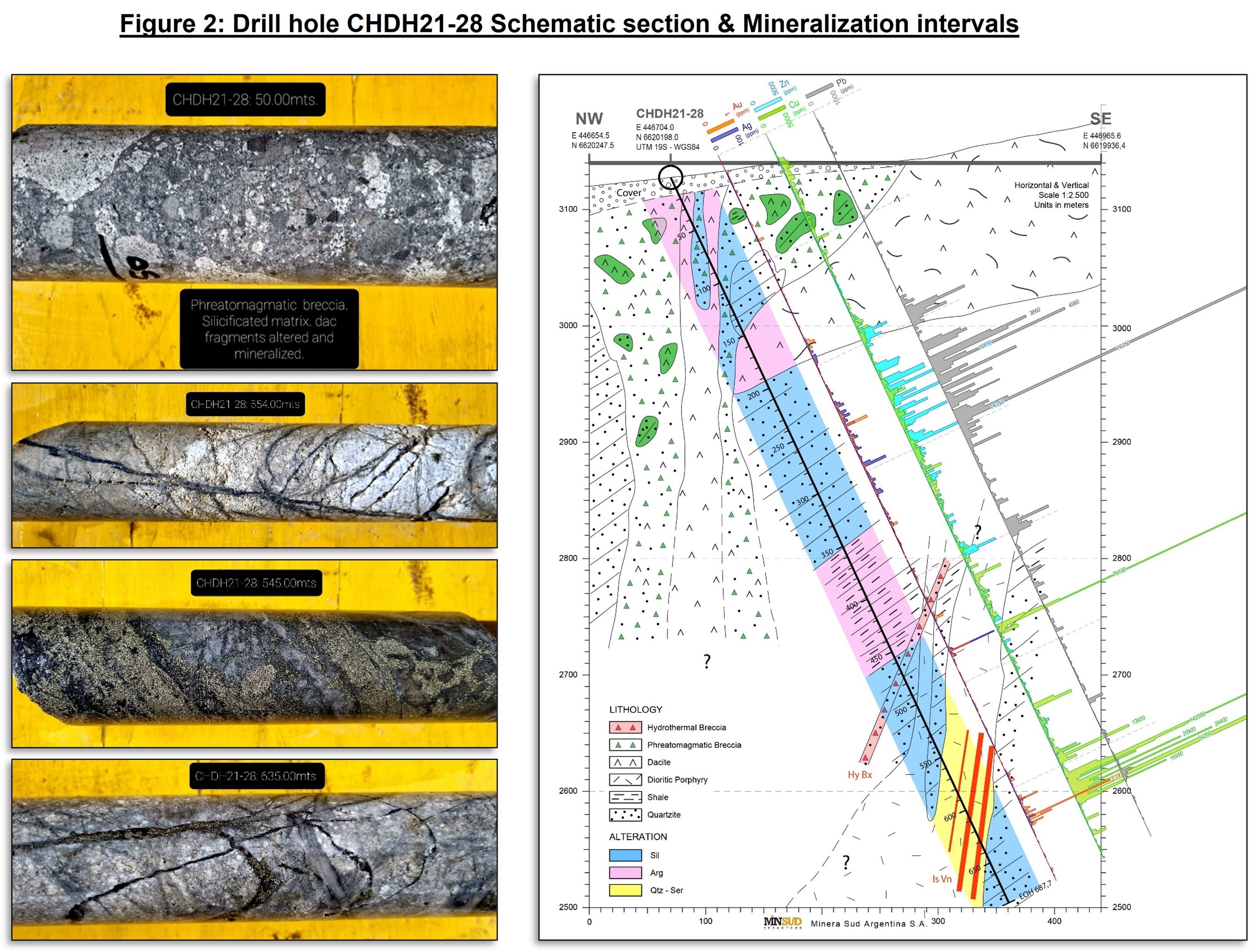 All core samples were submitted to the ALS Global Laboratories in Mendoza, Argentina for preparation and analysis. All samples were analyzed for Au by fire assay/ AA finish 50g, plus a 48-element ultra-trace four acid digest with ICP-MS and ICP-AES finish. Minsud followed industry standard procedures for the work with a quality assurance/quality control (QA/QC) program. Field duplicates, standards and blanks were included with all sample shipments to the principal laboratory. Minsud detected no significant QA/QC issues during review of the data.

Mr. Mario Alfaro, Professional Geoscientist, VP-Exploration of the Company, is a qualified person as defined by Canadian National Instrument 43-101. Mr. Alfaro visited the property and has read and approved the contents of this release.

The Chita Valley Project is a large exploration stage porphyry system with classic alteration features, widespread porphyry style Cu-Mo-Au and polymetallic Ag-Pb-Zn mineralization hosted by Hydrothermal Phreatic Breccias and associated gold and silver-bearing polymetallic veins of intermediate sulfide composition that conformed an outcropping porphyry system at Chita and a lithocap of a porphyry system at Chinchillones. San Juan Province of Argentina has a robust mining sector and recognizes the important economic benefits of responsible development of its substantial Mineral Resource endowment.

Current exploration activities on the Chita Valley Project are being funded by a subsidiary of South32 in accordance with the earn-in agreement between the parties entered into on November 1, 2019.

If South32 exercises its earn-in right it may elect to fund a pre-feasibility study, with a minimum spend of C$41 million, which would entitle it to elect to increase its 50.1% direct interest in MSA to 70%.

Minsud is a mineral exploration company focused on exploring its flagship Chita Valley Cu-Mo-Au-Ag-Pb-Zn Project, in the Province of San Juan, Argentina. The Company also holds a 100% owned portfolio of selected early-stage prospects, including 6,000 ha in Santa Cruz Province, Argentina.

South32 is a globally diversified mining and metals company. The company’s purpose is to make a difference by developing natural resources, improving people’s lives now and for generations to come. South32 is trusted by its owners and partners to realise the potential of their resources. South32 produces bauxite, alumina, aluminium, metallurgical coal, manganese, nickel, silver, lead and zinc at operations in Australia, Southern Africa and South America. With a focus on growing its base metals exposure, South32 also has two development options in North America and several partnerships with junior explorers around the world.

This news release includes certain information that may constitute forward-looking information under applicable Canadian securities laws. Forward-looking information includes, but is not limited to, statements about strategic plans, spending commitments, future operations, results of exploration, anticipated financial results, future work programs, capital expenditures and objectives. Forward-looking information is necessarily based upon a number of estimates and assumptions that, while considered reasonable, are subject to known and unknown risks, uncertainties, and other factors which may cause the actual results and future events to differ materially from those expressed or implied by such forward-looking information including, but not limited to: fluctuations in the currency markets (such as the Canadian dollar, Argentina peso, and the U.S. dollar); changes in national and local government, legislation, taxation, controls, regulations and political or economic developments in Canada and Argentina or other countries in which the Corporation may carry on business in the future; operating or technical difficulties in connection with exploration and development activities; risks and hazards associated with the business of mineral exploration and development (including environmental hazards or industrial accidents); risks relating to the credit worthiness or financial condition of suppliers and other parties with whom the Company does business; presence of laws and regulations that may impose restrictions on mining, including those currently enacted in Argentina; employee relations; relationships with and claims by local communities; availability and increasing costs associated with operational inputs and labour; the speculative nature of mineral exploration and development, including the risks of obtaining necessary licenses, permits and approvals from government authorities; business opportunities that may be presented to, or pursued by, the Company; challenges to, or difficulty in maintaining, the Company’s title to properties; risks relating to the Company’s ability to raise funds; and the factors identified under “Risk Factors” in the Company’s Filing Statement dated April 27, 2011. There can be no assurance that such information will prove to be accurate, as actual results and future events could differ materially from those anticipated in such information. Accordingly, readers should not place undue reliance on forward-looking information. All forward-looking-information contained in this news release is given as of the date hereof and is based upon the opinions and estimates of management and information available to management as at the date hereof. The Company disclaims any intention or obligation to update or revise any forward-looking information, whether as a result of new information, future events or otherwise, except as required by law.