Karora Resources Announces High Grade Nickel Results from the 50C Nickel Trough at Beta Hunt with Intersections of 5.3% Nickel over 2.2 metres and 4.0% Nickel over 3.5 metres, Extending the Zone to over 80 metres in Width

Assays are pending on a further 16 holes.

Paul Huet, Chairman and CEO of Karora said, “With each drill result, the nickel potential at Beta Hunt continues to build towards a very meaningful by-product contributor for Karora. We have now extended the width of nickel mineralization at the 50C discovery to over 80 metres along a strike length of 150 metres, remaining open along 2.6 kilometres of potential strike to the southeast. The high nickel grades intersected in the first two follow-up drill holes to the 50C discovery are very encouraging, with pending assays for sixteen remaining holes expected in the fourth quarter.

As a reminder, the 50C discovery is within close proximity to existing mine development, reflecting the enormous advantage we have at Beta Hunt with over 400 kilometres of existing underground development already in place due to previous mining operations. The development provides access to optimal underground drill bay areas to quickly advance exploration work and potentially facilitate both faster development and mining.

In the second half of 2021 Karora, has undertaken a 6,000 metre drill program aimed at extending both the previously reported 50C nickel trough discovery and the adjacent 10C nickel Mineral Resource. The 50C discovery was highlighted by the previously reported intersection of 11.6% Ni over 4.6 metres (downhole) in drill hole G50-22-005E. To date, 28 holes have been drilled for 4,986 metres. Assay results for the 50C and 10C drilling programs have been received for 6 holes.

Assay results for these holes are as follows:


Nickel mineralization on the targeted basalt/ultramafic contact has been logged as massive, matrix-supported and disseminated nickel sulphide, indicating that the nickel sulphide intercepts are representative of an intact nickel trough.

Drilling totaling eighteen holes has been completed up to 45 metres south and 100 metres north along strike from the discovery intersection with nickel sulphide mineralization evident in twelve of the completed holes. Porphyry intrusives in the northern drill sections have replaced parts of the nickel contact mineralization position as drilling moves closer to the Gamma Island Fault. Results are pending for sixteen 50C holes.

Significant results returned to date from the 10C drilling are highlighted below:

Overall, recent drill results continue to reinforce the potential for mineralization that is similar to the Beta Zone, south of the Gamma Island Fault and strengthen the initial interpretation that this new mine area, which is only 140 metres from existing mine development, represents a significant growth opportunity for by-product nickel production at Beta Hunt.

The structural and mineralogical characteristics of the 50C trough closely align with those of the Western Nickel Belt at the southern end of the Beta nickel workings indicating that the 50C nickel mineralization represents an offset extension to the Western Nickel Belt. The 10C is interpreted to be the offset extension to the Eastern Nickel Belt and has structural and mineralogical characteristics that are consistent with this interpretation. There is potential for both belts to join within the Gamma Zone mineralized system. Further drilling is required to support this interpretation.

It is anticipated that all nickel assay results from the first stage of drilling the Gamma Zone will be received before the end of 2021 in time to produce a revised nickel mineralization model to be completed during the first quarter of 2022. The revised model will form the basis of a follow-up drill program planned for the first half of 2022. 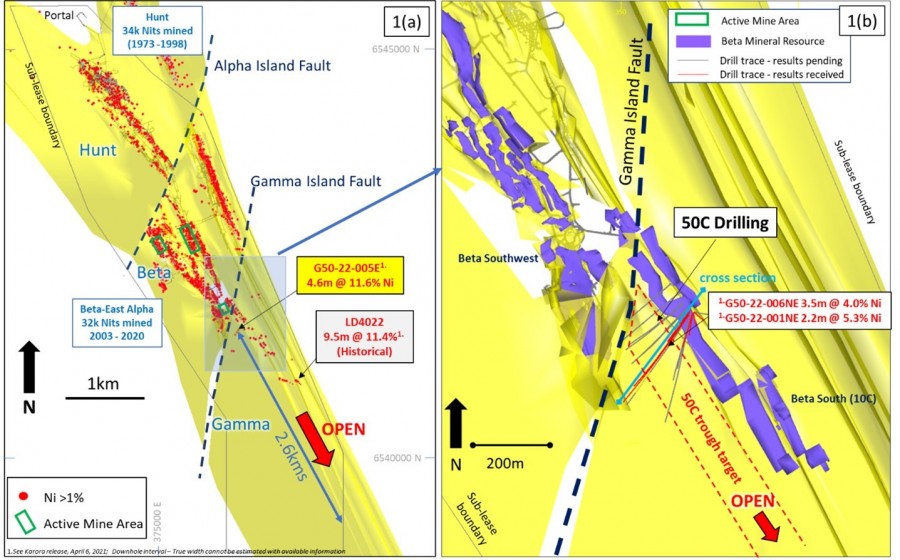 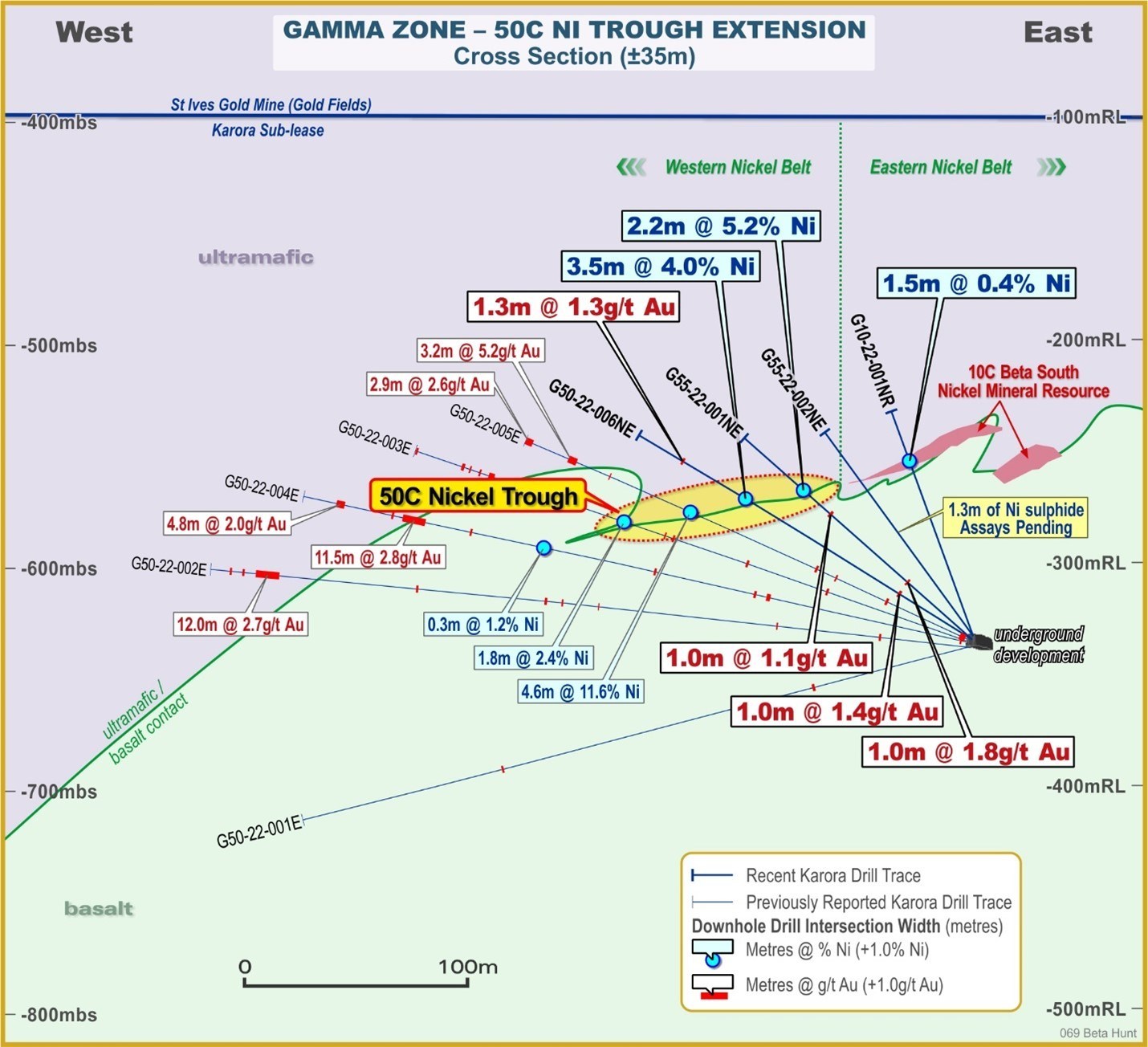 The disclosure of scientific and technical information contained in this news release has been reviewed and approved by Stephen Devlin, FAusIMM, Group Geologist, Karora Resources Inc., a Qualified Person for the purposes of NI 43-101.

At Beta Hunt all drill core sampling is conducted by Karora personnel. Samples for gold analysis are shipped to SGS Mineral Services of Kalgoorlie for preparation and assaying by 50 gram fire assay analytical method. All gold diamond drilling samples submitted for assay include at least one blank and one Certified Reference Material (“CRM”) per batch, plus one CRM or blank every 20 samples. In samples with observed visible gold mineralization, a coarse blank is inserted after the visible gold mineralization to serve as both a coarse flush to prevent contamination of subsequent samples and a test for gold smearing from one sample to the next which may have resulted from inadequate cleaning of the crusher and pulveriser. The lab is also required to undertake a minimum of 1 in 20 wet screens on pulverised samples to ensure a minimum 90% passing at -75µm. Samples for nickel analysis are shipped to SGS Australia Mineral Services of Kalgoorlie for preparation. Pulps are then shipped to Perth for assaying. The analytical technique is ICP41Q, a four acid digest ICP-AES package. Assays recorded above the upper detection limit (25,000ppm Ni) are re-analyzed using the same technique with a greater dilution (ICP43B). All samples submitted for nickel assay include at least one Certified Reference Material (CRM) per batch, with a minimum of one CRM per 20 samples. Where problems have been identified in QAQC checks, Karora personnel and the SGS laboratory staff have actively pursued and corrected the issues as standard procedure.

Karora is focused on doubling gold production to 200,000 ounces by 2024 compared to 2020 and reducing costs at its integrated Beta Hunt Gold Mine and Higginsville Gold Operations (“HGO”) in Western Australia. The Higginsville treatment facility is a low-cost 1.6 Mtpa processing plant, expanding to a planned 2.5 Mtpa by 2024, which is fed at capacity from Karora’s underground Beta Hunt mine and Higginsville mines. At Beta Hunt, a robust gold Mineral Resource and Reserve is hosted in multiple gold shears, with gold intersections along a 4 km strike length remaining open in multiple directions. HGO has a substantial Mineral gold Resource and Reserve and prospective land package totaling approximately 1,900 square kilometers. The Company also owns the high grade Spargos Reward project which began mining in 2021. Karora has a strong Board and management team focused on delivering shareholder value and responsible mining, as demonstrated by Karora’s commitment to reducing emissions across its operations. Karora’s common shares trade on the TSX under the symbol KRR and also trade on the OTCQX market under the symbol KRRGF.

This news release contains “forward-looking information” including without limitation statements relating to the timing for the completion of technical studies, liquidity and capital resources of Karora, production guidance and the potential of the Beta Hunt Mine, Higginsville Gold Operation, the Aquarius Project and the Spargos Gold Project.

Forward-looking statements involve known and unknown risks, uncertainties and other factors which may cause the actual results, performance or achievements of Karora to be materially different from any future results, performance or achievements expressed or implied by the forward-looking statements. Factors that could affect the outcome include, among others: future prices and the supply of metals; the results of drilling; inability to raise the money necessary to incur the expenditures required to retain and advance the properties; environmental liabilities (known and unknown); general business, economic, competitive, political and social uncertainties; results of exploration programs; accidents, labour disputes and other risks of the mining industry; political instability, terrorism, insurrection or war; or delays in obtaining governmental approvals, projected cash operating costs, failure to obtain regulatory or shareholder approvals. For a more detailed discussion of such risks and other factors that could cause actual results to differ materially from those expressed or implied by such forward-looking statements, refer to Karora ‘s filings with Canadian securities regulators, including the most recent Annual Information Form, available on SEDAR at www.sedar.com.

A production decision at the Higginsville gold operations was made by previous operators of the mine, prior to the completion of the acquisition of the Higginsville gold operations by Karora and Karora made a decision to continue production subsequent to the acquisition. This decision by Karora to continue production and, to the knowledge of Karora, the prior production decision were not based on a feasibility study of mineral reserves, demonstrating economic and technical viability, and, as a result, there may be an increased uncertainty of achieving any particular level of recovery of minerals or the cost of such recovery, which include increased risks associated with developing a commercially mineable deposit. Historically, such projects have a much higher risk of economic and technical failure. There is no guarantee that anticipated production costs will be achieved. Failure to achieve the anticipated production costs would have a material adverse impact on the Corporation’s cash flow and future profitability. Readers are cautioned that there is increased uncertainty and higher risk of economic and technical failure associated with such production decisions.