In Race To The Bottom, Miners Beat Gold


The medium-term outlook for precious metals is a bearish one, and as moves lower, the miners will move lower faster. Small price jumps don’t count.

Let’s get this straight, we’re not day traders, and getting excited about an occasional bounce is much ado about nothing.

Remember when I told you yesterday that the “strength” of gold stocks was likely more or less random and not a true sign of strength? Yesterday’s lack thereof confirmed it. Gold moved higher, but gold stocks almost didn’t. Implications? That was just a tiny, inconsequential, counter-trend upswing within a bigger decline.

Let’s take a look at what senior miners and junior mining stocks did yesterday. 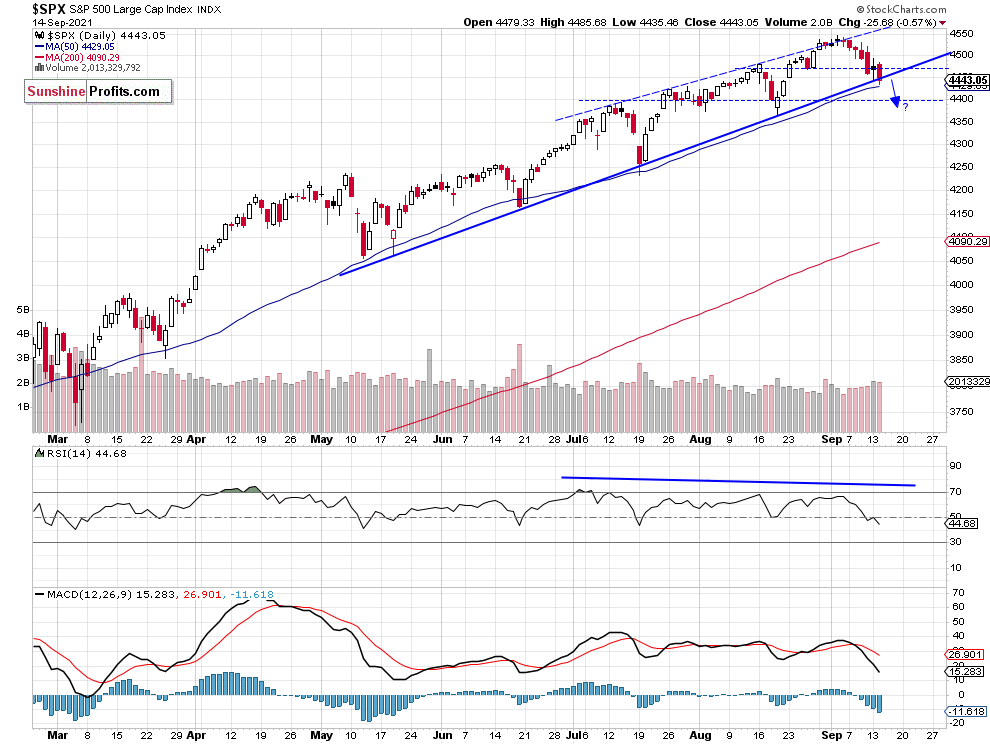 The GDX ETF (NYSE:) was up by a mere $0.16 and it closed the day very close to where it had closed on Aug. 23 – just a day after it rallied from its recent lows. In other words, the current GDX ETF price is practically just a single-day rally above the yearly lows. At the same time, gold is trading over $130 above its yearly lows. Are senior gold stocks really showing strength? Absolutely not. 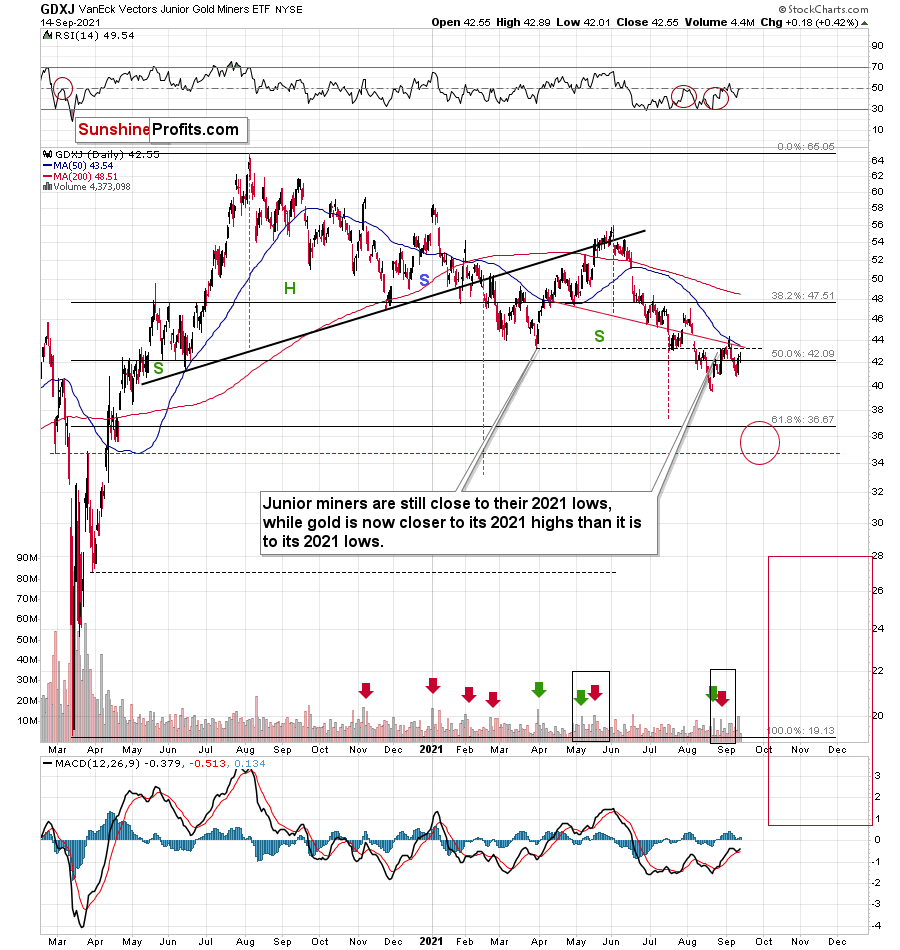 As far as junior miners are concerned, the situation is similar, but even more bearish. In VanEck Junior Gold Miners ETF (NYSE:), we have another sell signal coming from volume. It spiked, and the last time we saw the volume this high, was in mid-May. And what happened in mid-May? It was not the exact top, but it was very close to it, and shortly before a $15+ decline started. It was a perfect time to enter a short position in the junior miners, or one could use this indication as reassurance that this position is justified from the risk to reward point of view. (Of course, there are many more factors that point to this direction, not just the volume spike in the GDXJ ETF.)

Overall, juniors are verifying their previous breakdown to new yearly lows, and they are successful in this verification. This opens the door to huge declines wide open. 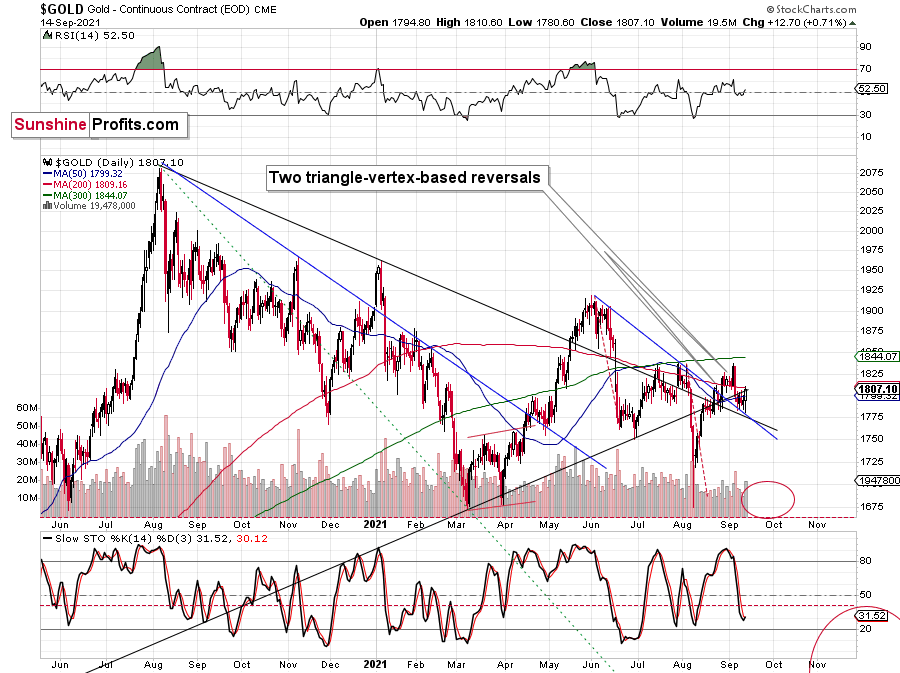 Just like I wrote earlier today, gold moved higher yesterday (it’s down in today’s pre-market trading, though), but it didn’t break any important resistance level, so this move was rather inconsequential. The outlook for gold and gold stocks remains bearish.

By the way, do you recall when I wrote that gold was likely to reverse in the second half of September or in the middle thereof, but that we’ll know more when we get closer to this date? Well, it’s the middle of the month today, and it’s obvious that we didn’t see a major decline in the recent days, just a relatively small one.

Consequently, it seems that the reversal that I mentioned previously will not be an important bottom, but an important top. This makes sense in light of the upcoming FOMC (in one week), which is likely to trigger some short-term volatility. Will the PMs and miners rally until the Fed speaks? It’s unclear, and not that likely. They could decline beforehand, or they could do nothing. The very near term is unclear, but that doesn’t matter that much, as the medium-term is very clear – the gold, , and mining stocks are going down.

One of the reasons is the more-than-confirmed breakout above the neck level in the ’s inverse head-and-shoulders pattern. 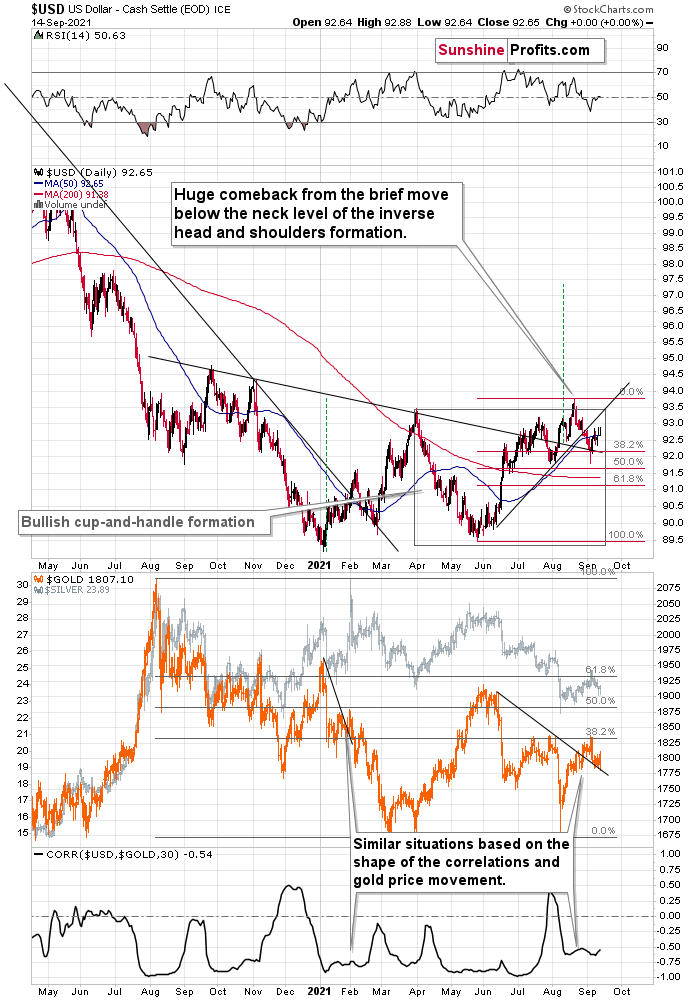 It took about a year for this bullish pattern to form, so it’s likely that its consequences will also be of medium-term nature. So far, the USDX has been moving back and forth, but when it finally moves, it’s likely to rally above 97, as the targets based on this formation are based on the size of its “head” (marked with green, dashed lines).