“The El Favor East zone is truly developing into a significant discovery in Los Ricos North,” said Brad Langille, President and CEO.  “We are currently drilling 900 metres to the east of the original discovery hole 48, and we are seeing what appears to be strong mineralization.  These results and other pending results may impact on the upcoming initial resource for Los Ricos North.” 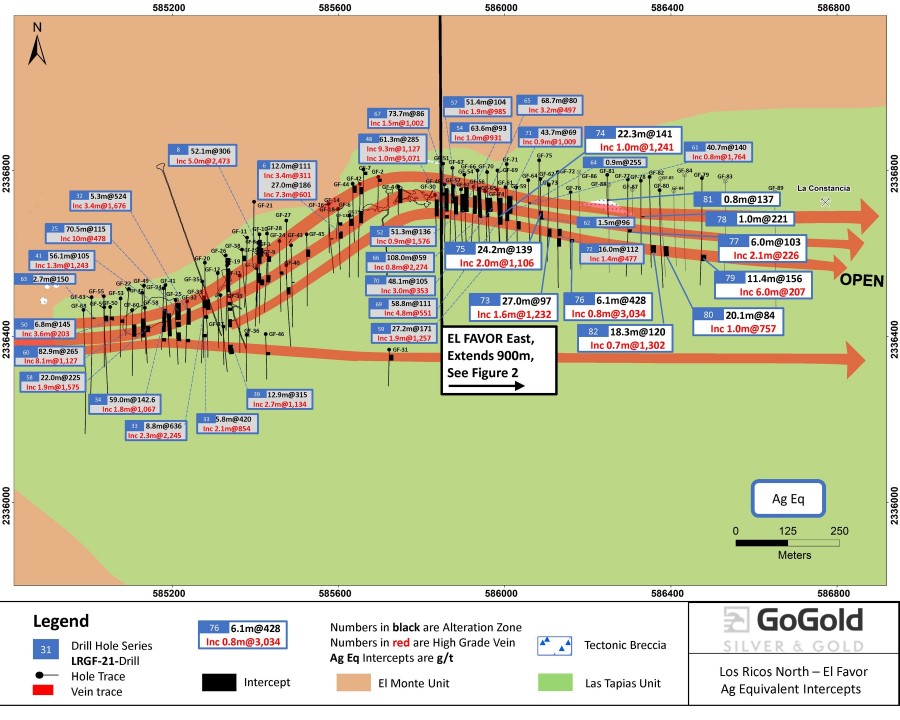 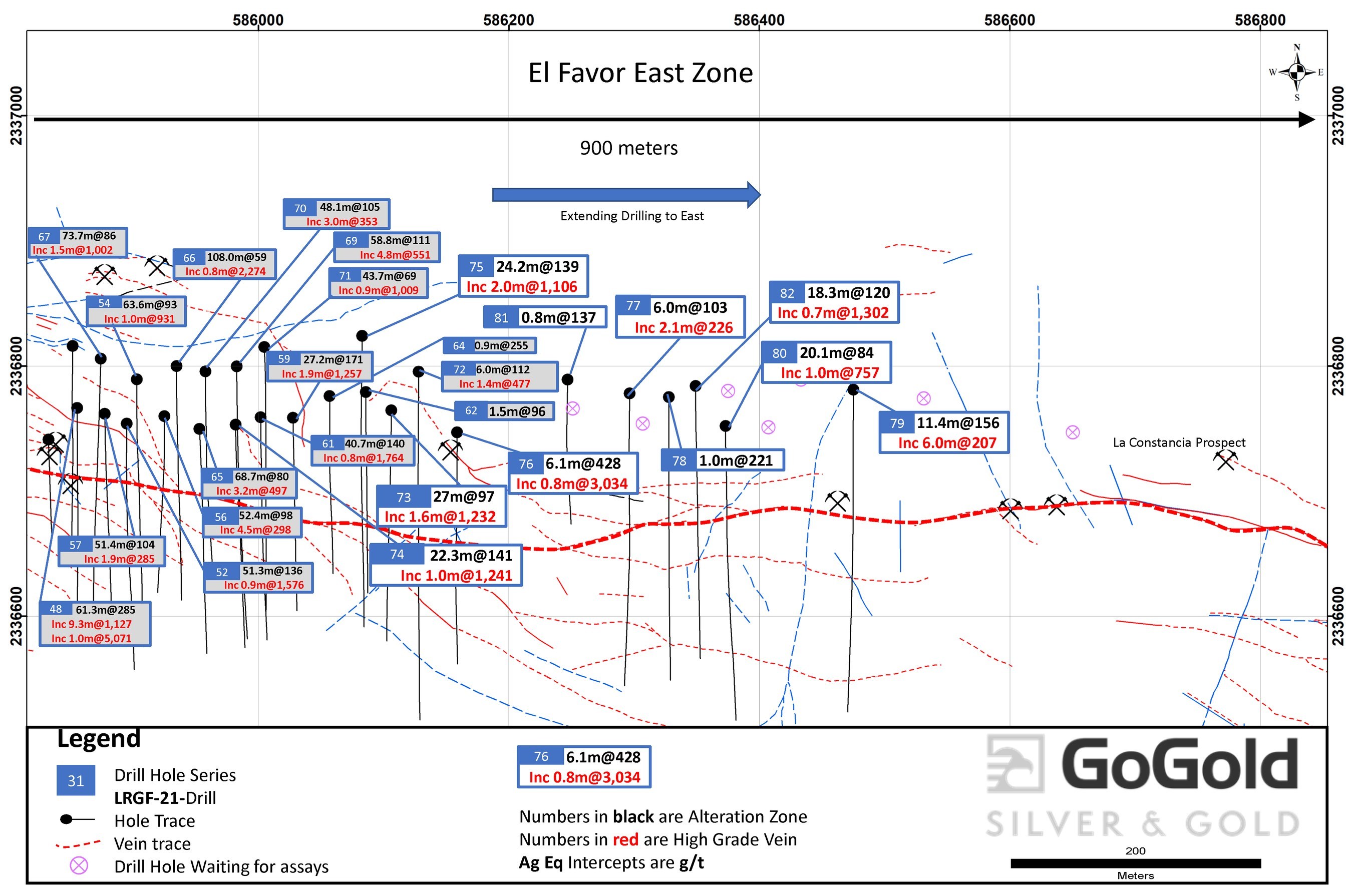 Three of the four major veins (Salomon, Guitarrillas and Los Chivos) appear to converge into a 100m wide zone at the western end of the El Favor deposit in the vicinity of the Hundido Pit at an elevation of 1300m.  The wallrock in between the veins is strongly silicified, altered and mineralized.  The merging of these veins continue to provide significant widths of good grade which could be potentially amenable to bulk mining.

The El Orito deposit (as presently defined) is located about 800 metres along strike to the west of the Hundido Pit (see Figure 3).  Wide zones of precious and base metal mineralization were cut by drill holes at El Orito at elevations between 600 to 800m. VRIFY is a platform being used by companies to communicate with investors using 360° virtual tours of remote mining assets, 3D models and interactive presentations. VRIFY can be accessed by website and with the VRIFY iOS and Android apps.

The VRIFY Slide Deck and 3D Presentation for GoGold can be viewed at: https://vrify.com/decks/10437 and on the Company’s website at: www.gogoldresources.com.

The Los Ricos North Project was launched in March 2020 and includes drilling at the El Favor, La Trini, Casados and El Orito targets.  During 2020, GoGold’s exploration team identified over 100 targets on the Los Ricos North properties, demonstrating the significant exploration potential.  The Company plans to drill 10 of these targets as part of its 2021 drilling program which is planned to exceed 100,000 metres of drilling and will be one of the largest in Mexico.

The diamond drill core (HQ size) is geologically logged, photographed and marked for sampling. When the sample lengths are determined, the full core is sawn with a diamond blade core saw with one half of the core being bagged and tagged for assay. The remaining half portion is returned to the core trays for storage and/or for metallurgical test work.

Quality assurance and quality control (“QA/QC”) procedures monitor the chain-of-custody of the samples and includes the systematic insertion and monitoring of appropriate reference materials (certified standards, blanks and duplicates) into the sample strings. The results of the assaying of the QA/QC material included in each batch are tracked to ensure the integrity of the assay data.  All results stated in this announcement have passed GoGold’s QA/QC protocols.

Mr. David Duncan, P. Geo. is the qualified person as defined by National Instrument 43-101 and is responsible for the technical information of this release.

GoGold Resources (TSX: GGD) is a Canadian-based silver and gold producer focused on operating, developing, exploring and acquiring high quality projects in Mexico.  The Company operates the Parral Tailings mine in the state of Chihuahua and has the Los Ricos South and Los Ricos North exploration projects in the state of Jalisco. Headquartered in Halifax, NS, GoGold is building a portfolio of low cost, high margin projects. For more information visit gogoldresources.com.

This news release may contain “forward-looking information” as defined in applicable Canadian securities legislation. All statements other than statements of historical fact, included in this release, including, without limitation, statements regarding the Los Ricos South and North projects, and future plans and objectives of GoGold, including the intention to undertake further exploration at Los Ricos North, and the prospect of further discoveries there, constitute forward looking information that involve various risks and uncertainties. Forward-looking information is based on a number of factors and assumptions which have been used to develop such information but which may prove to be incorrect, including, but not limited to, assumptions in connection with the continuance of GoGold and its subsidiaries as a going concern, general economic and market conditions, mineral prices, the accuracy of mineral resource estimates, and the performance of the Parral project. There can be no assurance that such information will prove to be accurate and actual results and future events could differ materially from those anticipated in such forward-looking information.

Important factors that could cause actual results to differ materially from GoGold’s expectations include exploration and development risks associated with GoGold’s projects, the failure to establish estimated mineral resources or mineral reserves, volatility of commodity prices, variations of recovery rates, and global economic conditions. For additional information with respect to risk factors applicable to GoGold, reference should be made to GoGold’s continuous disclosure materials filed from time to time with securities regulators, including, but not limited to, GoGold’s Annual Information Form. The forward-looking information contained in this release is made as of the date of this release.