In addition, the Company is pleased to report on the significant mineralized intersections from CC 20 -08 and 20-09 (see Table One).  The geology logged in these holes was previously reported in our news release dated November 18th, 2020.  Highlights of the drill intersections for the two holes are as follows:

The Central Canada gold zones in drill holes, CC20–08 and –09, comprised core lengths up to 35m, variably mineralized with pyrite, arsenopyrite and pyrrhotite in silicified and chloritic units and quartz veins.  The host rock lithologies include metamorphosed quartz feldspar porphyries, felsic pyroclastic units and mafic volcanic flows.  However, due to the intensity of alteration, identification of the host was at times difficult to ascertain.  The veins commonly contain contorted bands of quartz and tourmaline with pyrite, arsenopyrite and fine grains of chalcopyrite. 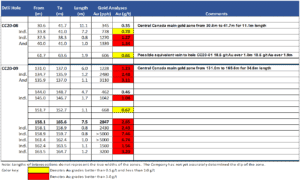 Mr. Karim Rayani, Falcon’s Chief Executive Officer commented, “These first results from Falcon’s fall drill program have delivered more evidence for a mineable deposit at this historic mine site.  With our geologists developing an understanding of the gold mineralization styles from repeated drilling of the zones, Falcon can better proceed with its plans to define an economic gold resource.  We have already submitted hundreds of samples for analyses and will have many more assays to come.  Our shareholders can expect to have more news on the developments on our Central Canada mine project over the coming weeks.”

The technical content of this news release has been reviewed and approved by Mike Kilbourne, P.Geo., who is a Qualified Person as defined by National Instrument 43-101, Standards of Disclosure for Mineral Projects.

Falcon is a Canadian mineral exploration company focused on generating, acquiring, and exploring opportunities in the Americas.  Falcon’s flagship project, the Central Canada Gold Mine, is approximately 20 km south east of Agnico Eagle’s Hammond Reef Gold Deposit which has Measured & Indicated estimated resources of 208 million tonnes containing 4.5 million ounces of gold.  The Hammond Reef gold property lies on the Hammond fault which is a splay off of the Quetico Fault Zone (“QFZ”) and may be the control for the gold deposit.  The Central Gold property lies on a similar major splay of the QFZ.

1935 – With the on-going financial crisis of the Great Depression, the Central Canada Mines was unable to fund operations and the mine ceased operations.

The Company also holds 4 additional projects.  The Camping Lake Gold property in the world-renowned Red Lake mining camp; a 49% interest in the Burton Gold property with Iamgold near Sudbury Ontario; the Spitfire-Sunny Boy Gold Claims near Merritt, B.C.; and most recently, the Springpole West Property near Red Lake, Ontario.