Delta, British Columbia–(Newsfile Corp. – October 13, 2021) – Desert Gold Ventures Inc. (TSXV: DAU) (FSE: QXR2) (OTCQB: DAUGF) (the “Company”) is pleased to provide initial results from its recently completed 257 hole, 18,161 metre drill program. As of October 7, results for approximately 2,700 samples or 14% of the 19,861 drill samples, are pending. Based on the lab’s schedule, the Company anticipates receiving results for most samples by mid October.

The 440 km2 SMSZ Project is both named after and overlies a 43 km section of the Senegal Mali Shear Zone (the “SMSZ”). The SMSZ is related to 5 large mines located both to the north and south, along strike, including B2 Gold’s Fekola Mine, Barrick’s Gounkoto and Loulo Mines and Allied Gold’s Sadiola and Yatela Mines[1]. To the Company’s knowledge, the SMSZ Project is the largest, contiguous, non-producer land package over this highly prospective structural feature (see Figure 1.).

The Company’s goal is to discover a tier 1 gold deposit associated with the regional-scale, gold-bearing fault and shear zones that pass through the SMSZ Project. Exploration at the SMSZ Project has discovered in excess of 22 gold zones with 2021 exploration data strongly suggesting that more will be discovered.

A complete set of results have been received for drilling in two areas including the Manakoto and Barani East/Barani Gap areas.

Drilling at Manakoto returned anomalous to strong gold values across eight, partially to well-defined structures, in the first pass drill program, with intercepts of up to 1.65 g/t gold over 21 meters (see Figure 2) and five wide, 10 metres or greater (to 45 metres) zones of gold bearing alteration (0.1 to 0.5 g/t gold). The Manakoto area is highlighted by a historic drill intercept to 1.84 g/t gold over 30 metres and numerous, anomalous Au-in-auger defined trends. This structurally complex area, which lies where the Senegal Mali Shear Zone makes a sharp northwest directional change, remains a high priority exploration target.

Good grade, but, narrow gold zones were intersected at the north end and to depth near the southern extent of the Barani East zone. As well, 2021 drilling to follow-up drill step outs from 2019 holes that returned to 3.03 g/t gold over 10 metres, demonstrated good continuity of the gold mineralization with the Barani East Zone supporting an inferred strike length for the Barani East Zone, of approximately 2.5 kilometres (see Figures 3 and 4). Drilling in this area, also intersected 2 new gold zones.

Desert Gold’s President & CEO, Jared Scharf commented, “Initial exploration results at Manakoto show multiple wide zones of gold enrichment which illustrate potential to host a large gold deposit with more work. Gold mineralization at the Barani East zone has now been traced for over 2.5 kilometres. More drilling will be required to truly understand the exploration potential of these vast areas.”

A summary of the Manakoto, Barani East and Barani Gap results are as follows (see Figures 2 and 3). True widths are estimated at 70 to 90% of drilled length.

Data for 94 holes totaling 7,073 metres is presented in this news release. These comprise 69 air core (AC) holes totaling 3,581 metres, 23 RC holes totaling 3,007 metres and 2 RCD holes totaling 486 metres. The Manakoto area returned strong results with drilling intersecting at least eight, well altered shear zones that returned strong to highly anomalous gold values along mineralized trends that can be traced for up to 1,700 metres. Combined, these anomalous structures comprise 6,650 metres of gold bearing exploration targets. The bulk of the Barani area holes were designed to test geochemical and geophysical IP chargeability anomalies. This work led to the discovery of new mineralization at Barani West, where a hole testing a 204 ppb gold soil anomaly returned 1.51g/t gold over 5 metres and at Keniegoulou South where an 820 metre step-out, to test a 5,610 ppb gold-in-auger anomaly, returned 1.05 g/t gold over 7 metres. More drilling is required in both of these areas.

The Manakoto area lies at the northern end of the property package proximal to where the Senegal Mali Shear Zone turns sharply to the northwest. In this area gold-in soil, gold-in-auger and historic drilling show at least eight north- to northwest-trending shear zones and fault structures that splay off of the Senegal Mali Shear Zone, within a 1 km wide by 2 km long area (see Figure 2). More, untested gold-in auger anomalies at the southern end of the area, remain to be tested, suggesting potential for additional mineralized zones. Previous drilling returned intercepts to 1.84 g/t gold over 30 metres with a 2021 best hole returning 1.65 g/t gold over 21 metres.

2021 drill holes comprising 2,196 metres in 42 shallow holes (most 50 metres long) were designed to both validate historic gold-bearing trends and to complete first pass drilling over new targets. This work resulted in the discovery of two new gold-bearing structures and the validation of six other trends. Mapping and modelling suggest that the gold bearing zones are near flat plunging with limited, 50 to 100 metres, of down-dip extent and an expectation that more flat plunging lenses will be discovered with continued exploration. Historic drilling in this area totals 7,106 metres in 155 holes.

The MZ1 Zone returned the best results with an historic intercept of 1.84 g/t gold over 30 metres (Figure 2). 2021 drilling extended the zone for an additional 100 metres to the north with intercepts of 1.68 g/t gold over 6 metres and nearby intercept of 0.47 g/t gold over 16 metres. This zone has been tested by drilling along a strike length of approximately 700 metres with geochemical data suggesting the Zone could be 1,000 metres long.

The MZ2 Zone lies approximately 150 metres west of the MZ1 Zone and returned the strongest intercept in the Manakoto area at 1.65 g/t over 21 metres (Figure 2). This structure has been traced for approximately 1,100 metres along strike with geochemical data suggesting a potential strike extent of 1,700 metres.

A large, artisanal excavator open pit (150 by 25 by 15 metres) marks the location of the MZ3 zone. Previous trenching returned 1.16 g/t gold over 8.3 metres, 2.71 g/t gold over 5 metres and 13.29 g/t gold over 2 metres. The first hole into this structure returned 2 closely spaced intercepts of 1.98 g/t gold over 5 metres and 1.72 g/t gold over 3 metres. These intercepts represent a 50 metre vertical step out. Prospecting, trench and artisanal mining activity, indicates that this zone can be traced for 400 metres along strike and is open in all directions. Note that there is no anomalous soil data in this area and auger drilling has not been carried out over this target.

Auger and drill data indicates that the MZ4 zone, which appears to lie immediately west of the Senegal Mali Shear Zone, can be traced for approximately 450 metres along strike. The recent program returned an intercept of 5.68 g/t gold over 2 metres from a single drill AC fence across the target.

Eight holes were drilled to further test the Barani East Zone, with 6 holes drilled along strike and two holes to depth to test the down-plunge of the higher-grade lens (see Figure 3). The northern edge of the modeled zone was enhanced by an intercept of 12.1 g/t gold over 1 metre. Two holes to test the down plunge of the main lens of gold mineralization intersected a series of narrow, lower grade mineralization with a best of 1.37 g/t gold over 3 metres. However, both of these holes appeared to intersect en-echelon higher grade zones that returned 10.5 g/t gold over 1.4 metres and 0.82 g/t gold over 2.5 metres. Both of these intercepts appear to be open down dip with the latter open up dip as well. Based on the results of these two holes, it appears that the lens of higher grade Barani East mineralization may be steeper than originally modelled (see Figure 4). In addition, holes drilled within the Barani Gap continued to intersect gold bearing zones which support extending the Barani East zone to the southeast into the Keniegoulou Zone. Additional drilling will be required along the strike of this mineralized trend.

Two additional holes were drilled to test a parallel lens of gold mineralization, with intercepts to 2.22 g/t gold over 17 metres (RCSP123) located approximately 650 metres to the southeast. One hole, BERC0018 returned several wide (up to 13 metres) zones of gold-bearing alteration (containing from 0.1 to 0.4 g/t gold) and a seven-metre-wide zone that returned 0.45 g/t gold. The second hole, drilled 45 metres to the south of RCSP123, returned low gold values.

The new Keniegoulou South Zone, 1.05 g/t over 7 metres, was discovered by testing a 5,610 ppb gold-in-auger anomaly. This hole represents an 850 metre step-out from the nearest hole and represents a target area that lies immediate east of the interpreted location of a shear zone that lies parallel to the Senegal Mali Shear Zone.

Partial results have been received at the Gourbassi East and West Zones and gold-in-auger targets to the north of the Barani Zone. Drilling was not completed over the Soa, Dambamba and Frikidi areas due to the onset of the rainy season. 152 holes totalling 8,000 metres of planned holes have not been drilled. Drill assay results will be released as a group for the different target areas after complete sets of assays have been received, validated and interpreted.

All auger and drill samples are delivered to SGS in Bamako, Mali where they are prepped. The prepped samples, are both shipped by truck to SGS’s facility in Ouagadougou, Burkina Faso, or remain at SGS’s laboratory in Bamako, for Au determination by fire assay. Standards, assay blanks and sample duplicates, are inserted into the assay stream every 22 to 30 samples, respectively equaling one control sample for every approximately every 8 assay samples. All assay batches are reviewed for quality with re-assays requested 20 samples on either side of standards that assay more than 2 to 3 SD from an excepted value and for blanks that contain more than 10 ppb gold.

There is no QAQC record for the historic fire assays for the Barani East, Barani, Keniegoulou, Keniegoulou South and KE zones and as such, until validated, may not be relied on with 100% certainty. However, from follow-up exploration carried out to date, the correlation between historic gold values and subsequent validation work, have generally been withing acceptable parameters.

On Behalf of the Board

Jared Scharf, President and CEO
Email: This email address is being protected from spambots. You need JavaScript enabled to view it.
Tel. No.: +1 (858) 247-8195 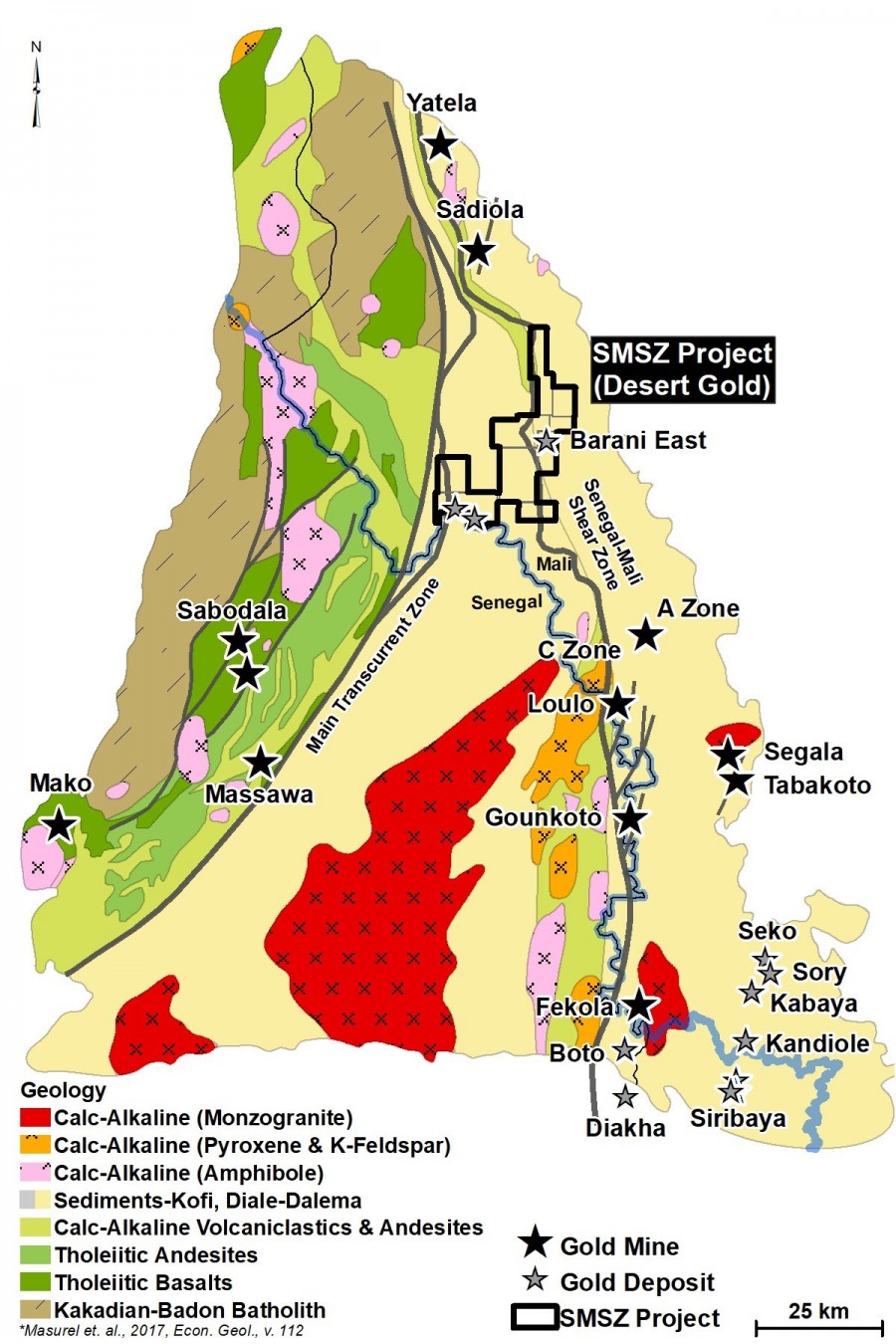 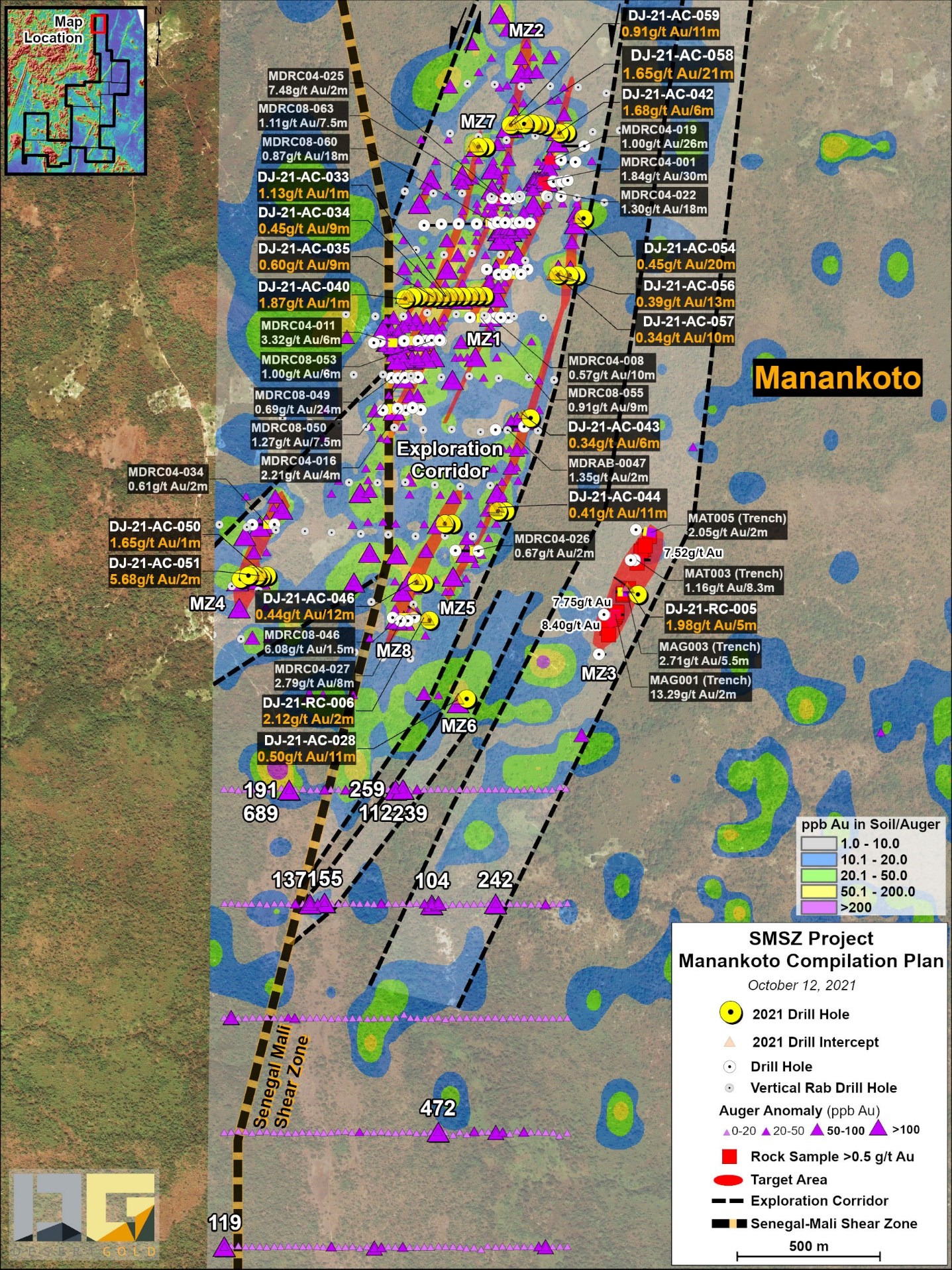 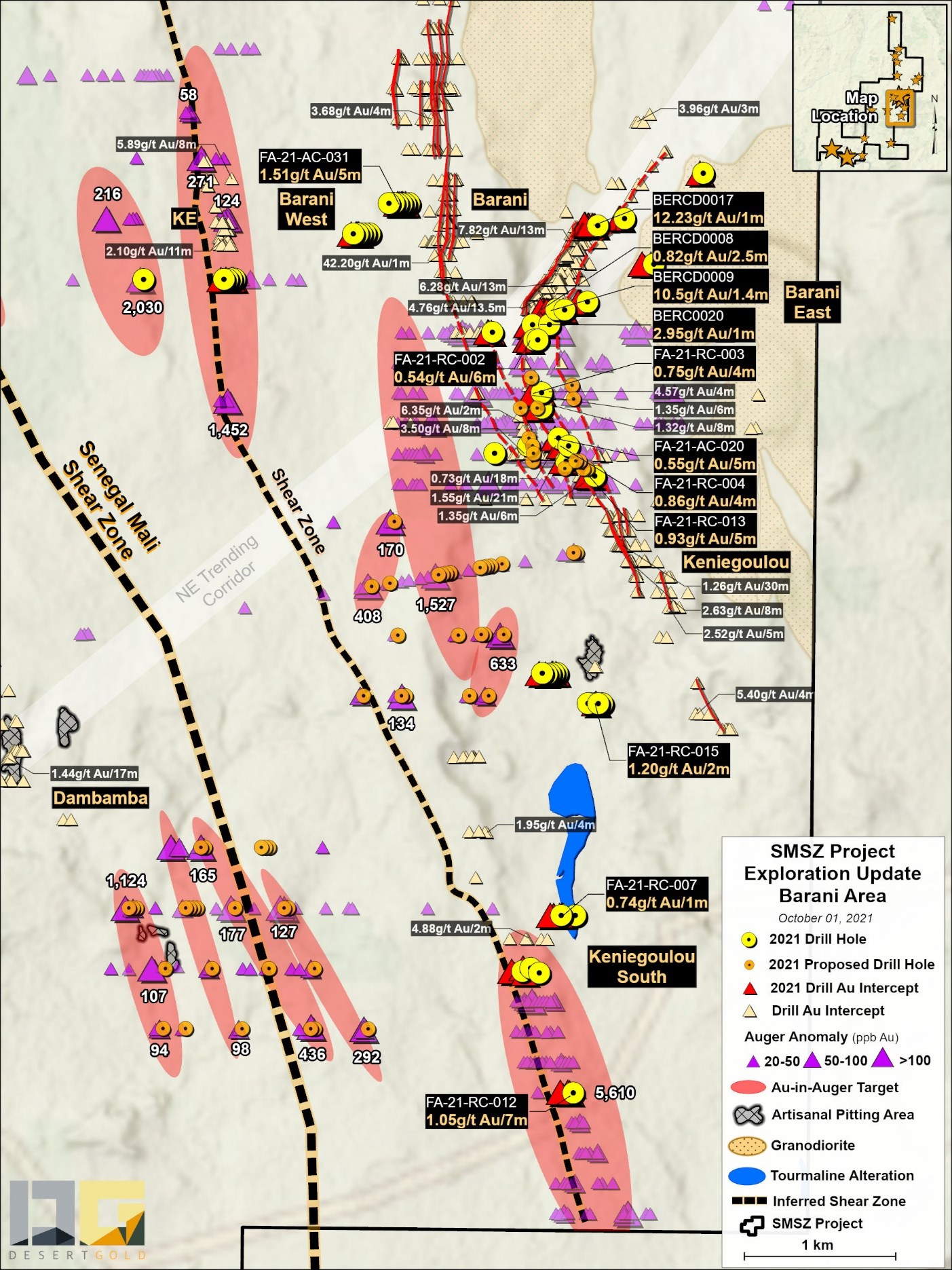 This news release contains forward-looking statements. These forward-looking statements entail various risks and uncertainties that could cause actual results to differ materially from those reflected in these forward-looking statements. Such statements are based on current expectations, are subject to a number of uncertainties and risks, and actual results may differ materially from those contained in such statements. These uncertainties and risks include, but are not limited to, the strength of the capital markets, the price of gold; operational, funding, liquidity risks, the degree to which mineral resource estimates are reflective of actual mineral resources, the degree to which factors which would make a mineral deposit commercially viable, and the risks and hazards associated with mining operations. Risks and uncertainties about the Company’s business are more fully discussed in the company’s disclosure materials filed with the securities regulatory authorities in Canada and available at www.sedar.com and readers are urged to read these materials. The Company assumes no obligation to update any forward-looking statement or to update the reasons why actual results could differ from such statements unless required by law. Neither the TSX Venture Exchange nor its regulation services provider (as that term is defined in the policies of the TSX Venture Exchange) accepts responsibility for the adequacy or accuracy of this release. This news release does not constitute an offer to sell or a solicitation of an offer to buy the securities described herein in the United States. The securities described herein have not been and will not be registered under the united states securities act of 1933, as amended, and may not be offered or sold in the United States or to the account or benefit of a U.S. person absent an exemption from the registration requirements of such act.