“We are thrilled to hit such high-grade intercepts on our first pass drill program at Cassiar South,” stated Marco Roque, President and CEO of Cassiar Gold. “Our early success at East Bain confirms a tremendous gold endowment and demonstrates our ability to effectively target these vein systems from surface drilling. We are excited to go back to the East Bain area later this month to further pursue the system and better delineate this high-grade vein structure.”

“Gold mineralization at Cassiar South is typical in style of orogenic gold systems globally,” stated David Rhys, Senior Technical Advisor for Cassiar Gold. “It has similarities in style and setting to the high-grade Beta Hunt Mine in Western Australia and Barkerville in B.C. and has comparable epizonal Au-sulphosalt mineral assemblages in high-grade veins which are present in Newfound Gold’s Keats Zone and at Fosterville in Victoria. The potential exists for additional parallel and stacked high-grade shear veins and vein systems to be discovered through exploration over a >10 km long trend in the central parts of the Cassiar property. The Company is also in the unique position of having near-term production potential at Cassiar South as there is underground access close to the veins and permits are already in hand, providing many options to advance the project.”

The 2021 drill program at Cassiar South is expected to consist of 21 drill holes totaling approximately 7,000 m targeting the lateral and down-dip extensions of historically producing vein areas including the Bain, Cusac and Main mines (see Figure 1). Areas around the Cusac and Bain mine areas have been drill tested by previous operators in the late 2000s and some of the drilling being carried out in the current drill campaign is aimed at confirming significant intercepts that were previously reported.

The Company is also exploring high-grade targets in prospective high-potential open and previously untested areas of favourable geology including the Hot, Bridge and Vollaug veins which were sparsely drilled by previous operators. Past-producing high-grade veins at Cassiar South, such as the Vollaug vein, are known to have strike lengths of up to 3 km. 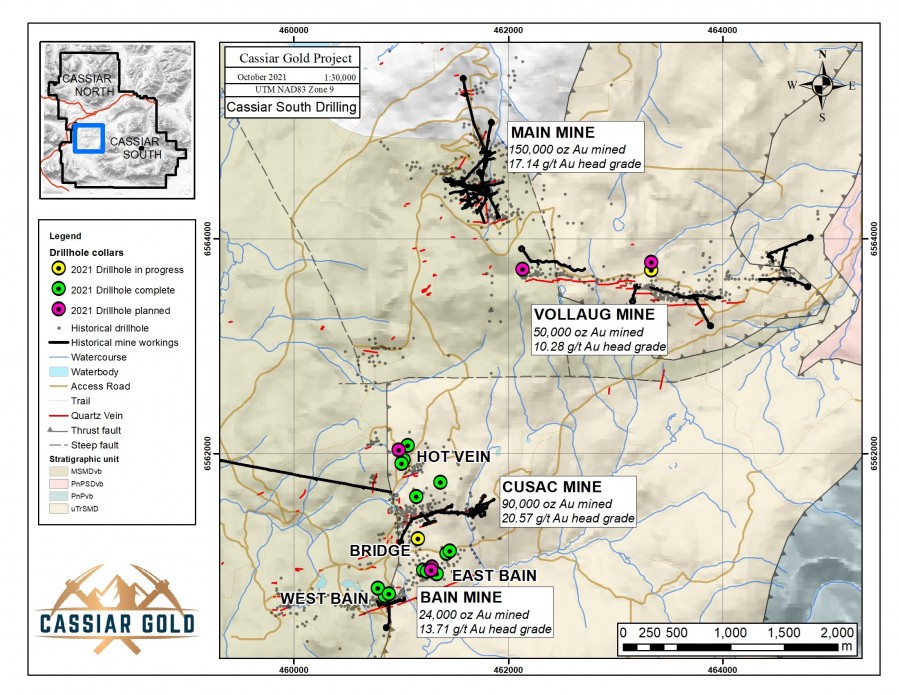 Results from the first six of nine holes drilled at the Bain vein were highlighted by drillhole 21EB-300 at East Bain which intersected 4.8 m of 35.1 g/t Au, including 0.5 m at 105.0 g/t Au and 0.4 m at 270.0 g/t Au. This drillhole confirms both the high-grade nature and associated quartz shear vein thicknesses of the historic Bain Mine and increases the extent and confidence in the high-grade continuity of the unmined portions of the vein system to the east (see Figures 1 and 2).

Drillhole 21EB-302 at East Bain tested a down-dip extension target at East Bain where a 2.24 m quartz vein associated with the structure was intersected at depth, returning 0.66 g/t Au over 1.32 m. While economic grades were not encountered, the drill hole extends the dip length of the vein system and the prospective window for associated oreshoots.

Three drillholes at West Bain (21WB-200, -201 and -202) targeted down-dip extensions of known or previously mined gold mineralization. All intersected gold-bearing quartz veining at the expected depth and confirmed the vein extent beyond historical drilling. See Table 1 below for a full list of results. 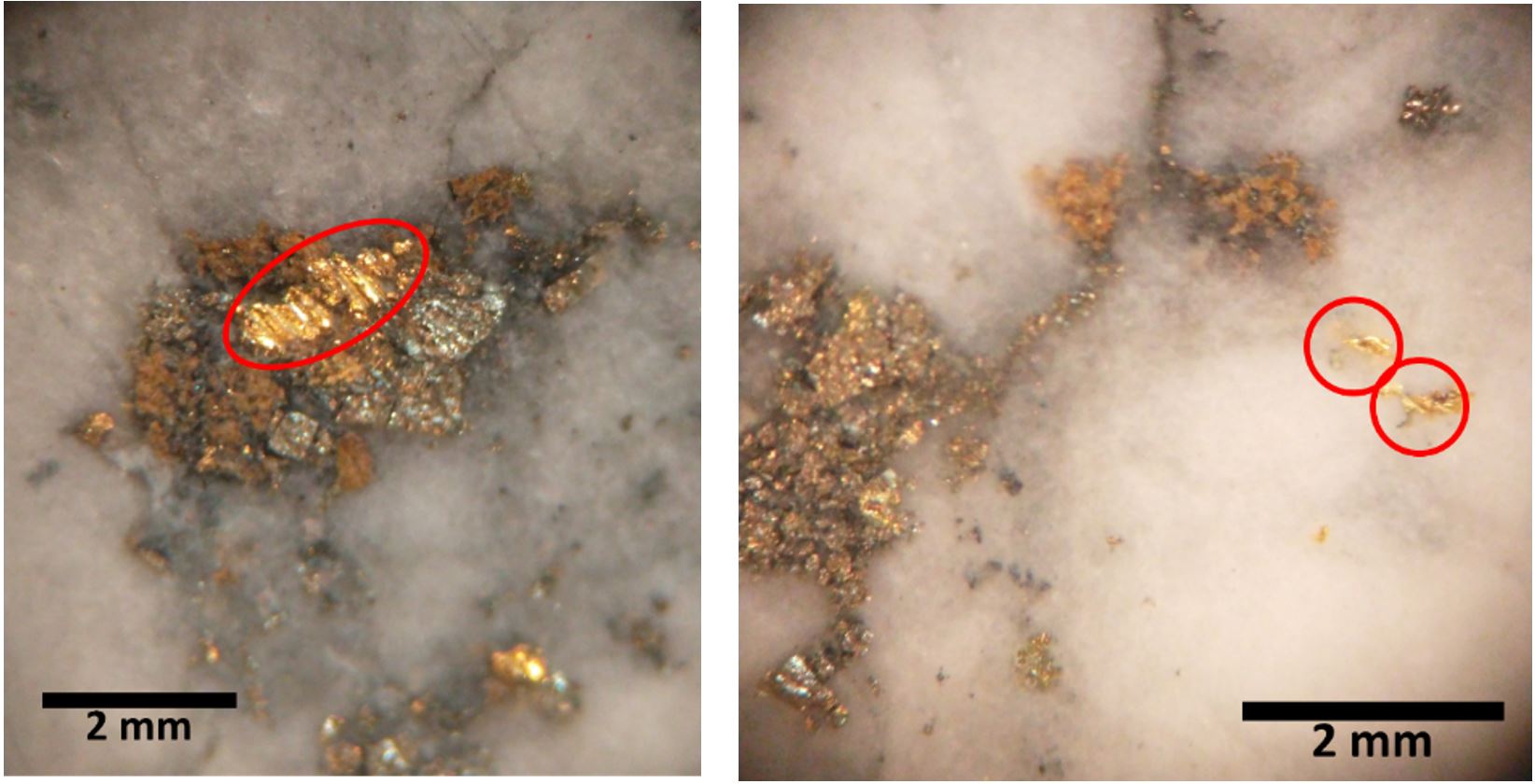 Plate 1: Visible gold with pyrite and tetrahedrite in quartz vein intersected in 21EB-300 at 184.5 m downhole. 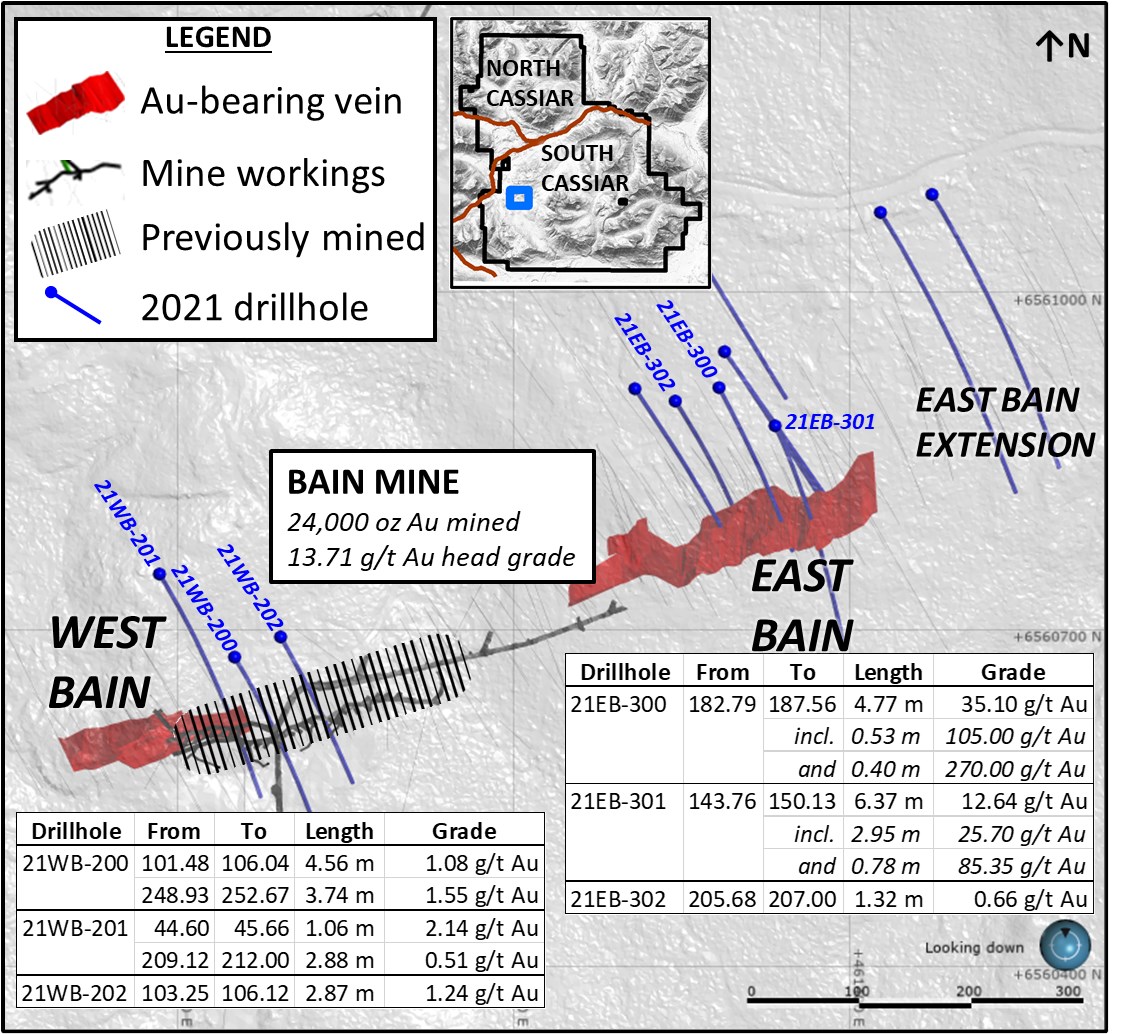 Two drill rigs are actively drilling at the Vollaug and Bridge veins at Cassiar South and drilling will continue until the end of October. An additional two holes are planned for the East Bain area to follow up on early drill success with one more hole planned at the Hot Vein and two additional holes planned at the Vollaug vein. Results from drilling is expected to be released through Q4/2021 and Q1/2022.

The technical information in this news release has been reviewed and approved by Kaesy Gladwin, P.Geo., Cassiar Gold Corp.’s Vice President of Exploration, who is considered to be a Qualified Person as defined by National Instrument 43-101.

The 2021 Cassiar drilling program comprises HQ drill core oriented using the REFLEX ACTIII system. Drill core samples selected and analyzed are logged and then cut in half using a diamond cutting saw, in a secure core storage facility located in Jade City, British Columbia. Certified gold reference standards and blanks are routinely inserted into the sample stream as part of the Company’s QA/QC program. All samples are delivered to the SGS Canada preparation facility in Whitehorse, Yukon, where they are processed, and then shipped to the SGS Canada analytical facility in Burnaby, British Columbia. Samples are analyzed for gold by 50-gram fire assay with finish by atomic absorption or gravimetric methods. Screen metallic analysis is performed on selected samples. SGS Canada quality systems and technical aspects conform to requirements of ISO/IEC Standard 17025 guidelines.

Cassiar Gold Corp. (TSXV: GLDC) (OTCQX: CGLCF) is a Canadian gold exploration company holding a 100% interest in its flagship Cassiar Gold Property located in British Columbia, Canada. The Cassiar Gold property spans 590 km2 and consists of two main project areas: Cassiar North, which hosts a NI 43-101-compliant inferred resource estimate of 1Moz at 1.43 g/t Au (cutoff grade of 0.7 g/t) known as the as the Taurus Deposit (see National Instrument 43-101 Technical report on the Cassiar Gold property, amended Nov. 12, 2019, by S. Zelligan, posted to SEDAR); and Cassiar South which hosts numerous gold showings, historical workings, and exploration prospects over a >15 km long and up to 10 km wide trend. Historical underground mines in the Cassiar South area have yielded over 300,000 oz of Au at grades of between 10 and 25 g/t Au (BC Minfile), underscoring the high potential for further discovery and expansion of bonanza-grade orogenic gold veins.

The Property is highly accessible by road and has a fully permitted 300 tpd mill and tailings facility, which could provide the potential for near-term production if new and expanded high-grade resources are defined in the areas of active mining leases that cover some of the most prospective parts of the South Cassiar area.

Cassiar Gold acknowledges, respects, and supports the rights of Traditional First Nations in the lands and communities where we operate.

Shirley Anthony
VP Investor Relations & Communications
1-778-999-2771
This email address is being protected from spambots. You need JavaScript enabled to view it.